Katherine Heigl is back at work and this time, she has jumped into the role of your average every day girl turned bounty hunter. Katherine Heigl’s upcoming film is based on Janet Evanovich’s first novel in the bestselling Stephanie Plum series and with 18 more books in the series, this could be more than just one Plum role!

Related story Katherine Heigl Shares Birthday Tribute to Daughter Naleigh That All Parents Will Relate To: 'How Did This Happen?' 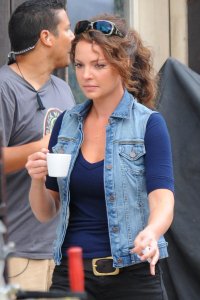 Fans of the Stephanie Plum thrillers now get why Katherine Heigl showed up at the Killers premiere with a head of sassy brown curls! The One for the Money protagonist turns to fighting crime, but she has long been waging war on her curly mane.

Katherine Heigl has made a career of playing the beautiful girl next door, but this time, there’s a twist — and we don’t just mean the dark hair.

After her new character catches her hubby cheating on her and then loses her job in lingerie sales, Stephanie forces her cousin Vinnie to give her a job. Unfortunately, Vincent Plum Bail Bonds doesn’t need a secretary, so the desperate normal girl throws herself into the life of an “apprehension agent.”

Needless to say, Stephanie lands a whopper of a case right out of the gate and since she’s a local gal, she also has a past relationship with her target. Instead of tracking some random dirt bag, she finds herself on the hunt for the one that got away in high school. It seems the guy who took her virginity is now a local cop accused of murder.

This film adaptation has been in the works since the 90s, with talk that author Janet Evanovich was picturing Sandra Bullock for the role. Instead, Reese Witherspoon was tied to the role, only to be replaced by Katherine Heigl without explanation.

After all these years, shooting finally kicked off Monday, July 12 in Ambridge, Pennsylvania and Katherine Heigl has got a few TV hunks onset with her, including Rescue Me’s slick bad boy Daniel Sunjata (Ranger), former Life on Mars star Jason O’Mara (Joe) and Patrick Fischler (Cousin Vinnie), who has had roles in everything from Lost, Mad Men and Southland to Dinner for Schmucks.

Word is The View’s Sherri Shepherd will also be in pocket, while Cristina Aloe plays bail bonds receptionist, Connie.

So Stephanie Plum fans, what do you think of the cast?

Read on for more Katherine Heigl