Oprah Winfrey has battled her weight in front of the camera for decades. Now, the daytime queen says she’s through with dieting, thanks to what she learned from the book Women Food and God: An Unexpected Path to Almost Everything.

“This book is an opportunity to finally end the war with weight and unlock the door to freedom,” Oprah Winfrey praised. “This has literally broken me open when it comes to my relationship with food. If you struggle with your weight, [this] might be actually the first time in your life that you begin to understand the real reasons you are fat and allow those reasons to be a miracle for your life.” 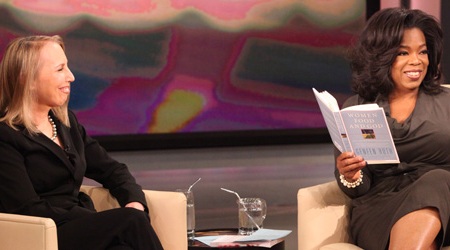 Oprah’s new favorite self-help book was written by Geneen Roth, who waged her own battle against the bulge for years. After gaining and losing over 1000 pounds by the time she was 28, Roth’s feelings of hopelessness left her suicidal.

Instead of giving up, however, Roth had a breakthrough and after she finally got a handle on her own issues, she went on to share her experiences with seven weighty books, including her first breakout hit When Food Is Love: Exploring the Relationship Between Eating and Intimacy.

Now, she’s taken those lessons even further in her newest opus on food compulsions, Women, Food and God: An Unexpected Path to Almost Everything.

The bestselling self-help book is helping women embrace this idea by reflecting on how fear and hopelessness factor into overeating, offering seven principles to healthy eating and most importantly, tsk-ing the female tendency to self hate.

Don’t let the word “God” in the title scare you away. The message here is not one of religion, but rather about spirituality and our connection with what Roth calls “the source.”

“I’m talking about wonder and mystery and possibility. Or the feeling you have in nature. The feeling that everything is possible,” Roth explained.

“The issue isn’t really the food,” Oprah added. “It is about your disconnection from that which is real, which we call God.”

One of the central premises of the book is that in losing this connection and our sense of self worth, many of us end up feeding our painful emotions with food, instead of facing them.

Even Oprah admits to that fateful flaw.

“There’s still anxiety when I have to say “No” to someone,” she said. “I still worry, “What are they going to think?”… [That happened recently and] I did not eat a pound of potato chips. I ate a pound of lettuce. But it’s the same thing. I’ve switched the drug from potato chips to lettuce.”

Roth’s book points out that no matter how much lettuce or chips we pound in, we’re not going to feel any better. In fact, once we overeat, we have something extra to feel bad about!

This ties into another major premise of Women, Food and God, which is that self hatred is our biggest enemy and all that yo-yo dieting gives the enemy more power. Women, Food and God tasks readers to love themselves and live by seven key principles.

“I call them eating guidelines, but I also call them the if love speaks instructions. Because people make them into rules right away, then they have to rebel against them and break them,” she explained. “So don’t make them into a diet.”

Have you read Women, Food and God yet? If so, let SheKnows readers know if and how the book helped you.