Carrie Underwood wed Canadian hockey hunk Mike Fisher on July 10 and details about the Southern affair have been released! 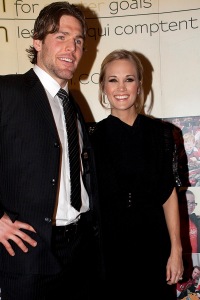 Carrie Underwood was pretty in pink when she and Mike Fisher tied the knot in front of 250 of their closest friends. No, the bride wasn’t decked out in pink herself! The country crooner gave pink makeovers to the Ritz-Carlton Reynolds Plantation resort in Georgia and her best little man, Ace.

“There was pink lighting and pink things hanging from the ceiling, flower balls and ribbon and sparkles,” Carrie told People magazine in this week’s cover story.

As for her pooch Ace, word is he walked the aisle with the ring bearer and flower girl wearing a not-so-manly pink Swarovski crystal-encrusted tuxedo.

“Mike was like: He’s in pink! What are you doing?” Carrie Underwood said. “But he looked so handsome.”

The blushing bride went very traditional with her own attire.

Carrie Underwood walked the aisle in a white Monique Lhuillier princess gown, detailed with Chantilly lace and silk organza. The look was topped off with a silver tiara, a wedding gift from her hubby that sported over 40 carats of diamonds!

She returned ready to party in a strapless Lhuillier cocktail number.

“The wedding dress was huge,” Underwood told People. “I wanted to get my boogie on, so I had to change.”

With talk of a $500,000 budget, the couple treated wedding guests like Tim McGraw, Faith Hill and Simon Cowell to a four-course dinner, followed by a wedding cake made of cupcakes and other festivities.

“Everybody was dancing and acting the fool,” Carrie reported.

The new issue of People mag has the full story, along with photos of the fab event.

Read on for more Carrie Underwood