John Stamos may be in trouble. 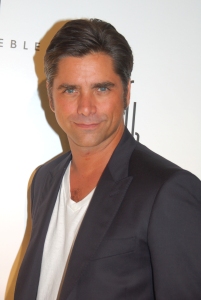 Scott Edward Sippola, 31, and Allison Lenore Coss, 24, of Marquette, Michigan are charged with conspiring to extort 47-year-old Stamos out of $680,000. They are alleged to have said that they had photos of him with cocaine and strippers while in Orlando in 2004. They have pleaded not guilty.

John Stamos testified Tuesday during a federal trial in Marquette that he was on vacation in Florida in 2004 shortly after he had separated from his wife, actress and supermodel Rebecca Romijn. He read through a lengthy succession of e-mails he had with Coss and a “Brian L” who was seeking to arrange payment from Stamos for alleged compromising photos of the actor and Coss. John Stamos reported the crime to the FBI, who arranged a sting operation to catch the two defendants.

It is alleged that John Stamos noticed Coss and another girl at a club, asked them over, then later invited the teens to his hotel room and ordered a drink for Coss even though she admitted she was 17 years old. It continues that two strippers eventually showed up in the room with a bag of cocaine and her friend took a picture of Stamos bending over a table where the drugs had been laid out.

Prosecutors contend the pictures don’t exist. John Stamos testified he is “too smart” to be involved in situations where compromising photos would be taken.

Stamos’ lawyer told the jury of eight men and four women that this is a get-rich-quick scheme that is based on lies and betrayal.

Read on for more John Stamos