The official dates for the postponed U2 360 degree North American tour have been released and Bono is talking! With the U2 frontman literally back on his feet, the 2010 European tour will begin as scheduled on August 6 in Turin. 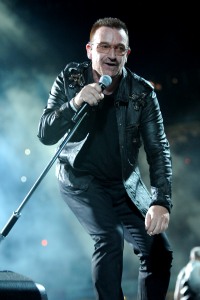 Bono’s emergency back surgery in May put a kibosh on the North American leg of this summer’s U2 360 degree tour, but as promised, the show will go on at a later date and your tickets are valid for the rescheduled performances.

U2’s legendary frontman is more than just on the mend. Bono is strong enough now that he was literally on his feet in a new U2 video message to fans!

“I can sit. I can stand. I can move around a bit,” Bono said. “Feeling strong, feeling confident…and I am ready. Rebuilt by German engineering. Better design, I’m told.”

“I’ll be fighting fit next summer in the US,” Bono continued. “Looking forward to this summer in Europe and really actually wanted to apologize for the trouble that this injury has put you all through, those of you that bought tickets and organized hotels and travel plans. It’s a very big deal…We don’t take for granted. Thank you for standing by us in our hour of need.”

Bono revealed that while his serious back injury was “not a lot of fun,” there was on upside to being stuck in bed, staring at the ceiling.

“Got some great songs, which we’ve been recording and might be playing them onstage,” he previewed. 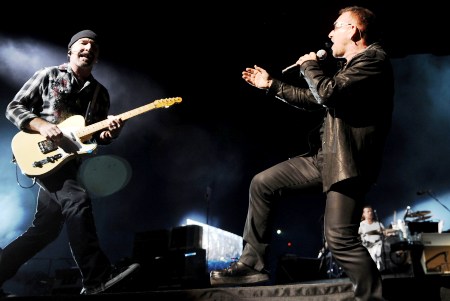 Tickets for the previously scheduled US performances will be honored at the door and if you missed the first sale, additional tickets may be available at the usual outlets.

“We’re delighted the dates are rescheduled and in all the same venues we originally planned to play,” U2’s manager Paul McGuinness said. “We want to thank the U2 fans for bearing with us. They’re the best and the band wants to get back to where they belong, surrounded by their audience.”

The new dates are posted below. If you can’t make the replacement show and are looking for a refund, they are also still available at point of purchase.

Read on for more U2