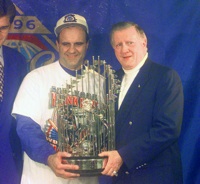 Steinbrenner suffered a massive heart attack on the morning of July 13 and was pronounced dead at St Joseph’s Hospital in Tampa.

In a statement to the press the family said, “It is with profound sadness that the family of George M Steinbrenner III announces his passing. He passed away this morning in Tampa, Florida, at age 80. Funeral arrangements will be private. There will be an additional public service with details to be announced at a later date.”

George Steinbrenner bought the declining Yankees in 1973, vowing to stay out of the day-to-day management of the team — a promise that’s laughable in hindsight. He became the most powerful and influential executive in the history of sports.

Under Steinbrenner’s reign, the Yankees nabbed 11 pennants and seven World Series titles. He was a polarizing figure among players, showing love to some like shortstop Derek Jeter but deriding others like Hideki Irabu and Dave Winfield. He was known for meddling in the smallest of company matters.

“George is a great guy, unless you have to work for him,” said former Yankees manager Lou Piniella.

Say what you will about his methods, but George Steinbrenner turned the Yankees organization from a has-been to the gold standard for all of baseball.

Steinbrenner’s health was failing in recent years — he handed over the reigns to sons Hank and Hal in 2006 — but attended the opening game of the new Yankee Stadium in April of that year, visibly crying when he received a standing ovation at his introduction.

“Winning is the most important thing in my life, after breathing,” Steinbrenner often said. “Breathing first, winning next.”