It’s a new Amanda Seyfried in Chloe as she takes on the title character after a year of break-out roles including Dear John, Letters to Juliet and TV’s Big Love. 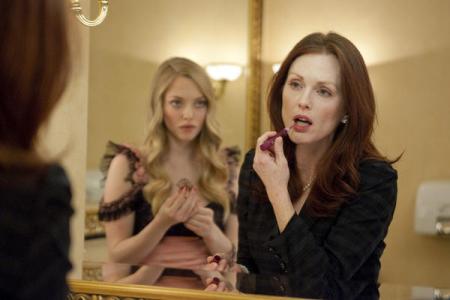 David (Liam Neeson) and Catherine (Julianne Moore) appear to be living wedded bliss with their teenage son and life in the suburbs.

Julianne Moore suspects Liam Neeson of cheating so she hires a young woman (Chloe) to seduce her husband to know for sure. Then, things become complicated. 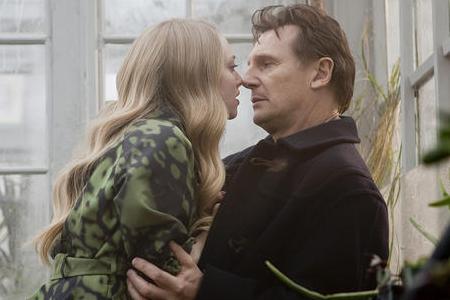 Chloe is the latest film from acclaimed director Atom Egoyan. Egoyan is an Academy Award Best Director nominee courtesy of his work on The Sweet Hereafter.

In fact, other than the soon-to-be-nominated-for-something Amanda Seyfried, Chloe is a meeting of Academy Award-nominated minds. Besides Egoyan’s Oscar pedigree, Chloe stars Liam Neeson who is an esteemed nominee, as is Julianne Moore. Moore, to be specific, has been nominated four times!

Erin Cressida Wilson, screenwriter for Chloe, tells us in our exclusive clip about the long writing process that was bringing Chloe to life. The filmmaker has her finger on the pulse of the thriller, as seen with her terse screenplay for Secretary starring Maggie Gyllenhaal.

Read on for more Chloe cast