Sheryl Crow has got a new album, a new baby, and a new music video for Summer Day. Crow is having a banner year! 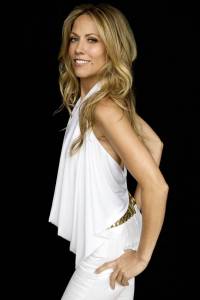 It’s been a busy few months for Sheryl Crow, who kicked off the summer by announcing Crow had adopted a baby boy, Levi James Crow, and would be headlining part of the re-launched Lilith Fair concert tour. But she’s also hitting the road to support her seventh album, 100 Miles from Memphis.

Sheryl Crow, a breast cancer survivor, will be hitting the road for the 100 Miles from Memphis tour from August through October. In the meantime, Crow has released a video for her first single, Summer Day. Summer Day was directed by Wayne Isham, the man responsible for such videos as Britney’s Piece of Me, N’Sync’s Bye Bye Bye and Bon Jovi’s Livin’ on a Prayer, to name just a few.

The Grammy-winning mother of two young boys, Levi is nine weeks old and her elder adopted son, Wyatt Steven, is 3, recently spoke to Redbook about how her life changed after her cancer diagnosis in 2006.

Sheryl Crow, 48, says she felt “an acute sense of urgency about how I wanted my life to feel,” so she started preparing to be an adoptive mother — taking part in a home study, filling out paperwork and learning infant CPR. “The idea was, if the opportunity came, I would be ready,” Sheryl Crow explained.

After adopting Wyatt in April 2007, Sheryl Crow planned on adopting again in the near future but, “A lot of the adoptions fell through,” she revealed.

With Wyatt and Levi at home, Sheryl Crow said, “Things always work out perfectly. Generally, when you let go of your vision of how something is supposed to be, the universe hands you exactly what you need.”

Read on for more Sheryl Crow