Just like his character Jim on The Office, John Krasinski is now a married man. John Krasinski wed Emily Blunt on July 10 in a private ceremony in Italy. 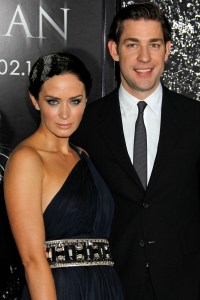 While Jim and Pam got married at Niagara Falls on The Office, John Krasinski and Emily Blunt took a more lavish approach to their real life nuptials, as they tied the knot at the Villa D’este in Como, Italy.

The ceremony was held outdoors and was attended by none other than Lake Como fixture, and John Krasinski’s Leatherheads co-star, George Clooney, who was accompanied by his girlfriend, Elisabetta Canalis. Krasinski and Blunt had been staying in George Clooney’s villa since the Fourth of July weekend.

A source close to Emily Blunt and John Krasinski confirmed to UsMagazine.com, “It was an official ceremony. They are husband and wife.”

Emily Blunt and John Krasinski have been dating since 2008 and became engaged in August 2009. They wed just one week after John Krasinski’s onscreen wife, Jenna Fischer, got married herself to writer Lee Kirk.

Read on for more celebrity weddings