SheKnows: What was it about The Closer that you made the jump to TV from a successful career in films? Did you have offers to come to television prior to The Closer? 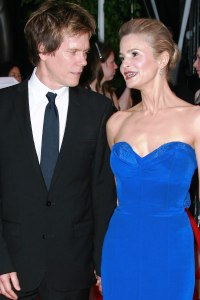 Kyra Sedgwick: You know, I had opportunities to do other dramas. It always was very important to me to have levity with drama. And I love the fact that we can have the darkest, most disturbing episode right up against absolute slapstick [laughs]. I just love that we’re facile enough to do that. Our audience is facile enough to want to ride that roller coaster with us. I love that.

SheKnows: Will we see Kevin Bacon on The Closer set anytime soon, directing or otherwise?

Kyra Sedgwick: He is not coming back this season. He’s just too busy with other things. But it’s great to work with him. It’s very easy. I think his first episode (as a director) in season two, I think I was really nervous the first time he came on set. I just wanted everyone to love him as much as I do in terms of a director. I’ve worked with him several times as a director in films that we’ve done together and he’s just really great with actors, which is sort of a given. But he’s also really great with story and really great moving the camera around. I think that whenever a new director comes on set, there’s always this moment of like, OK, is this guy going to be cool, or is this woman going to be good to work with? Am I safe? I really wanted everyone to enjoy the experience, as I knew they would. And of course they did.

SheKnows: With your relationship in The Closer with your TV husband, Jon Tenney, you guys have such chemistry. What are your thoughts about working with the tough on the outside, sensitive on the inside onscreen partner? Also, is there a scene over the last seven seasons that stands out working with Jon? 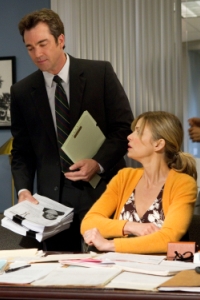 Kyra Sedgwick: I love that scene after we got married. Where she says to him, “I love you with all my heart, but sometimes I feel like my heart is only this big,” and she points to her heart while spreading her finger apart just a little bit. Because I think that she feels like so much of her life has been consumed in darkness, she doesn’t have a very big heart, even though, of course, we know better. And then he actually says to her, “I see all of you. I know who you are. Do you think I don’t know who I married?” I think that that was a beautiful moment for Fritz as well as for Brenda. And that was sort of a moment of connection for them that they don’t always have. But I love working with Jon. I think he’s an extraordinary actor.

How much Closer in the family?

SheKnows: Your daughter guest starred last year on an episode of The Closer, what was your reaction to her wanting to be an actress and will we see her return as your niece in the future?
Kyra Sedgwick: She’s not coming back this season. She just graduated from high school and I think that she wants to enjoy the summer and not work. I feel kind of hypocritical because on the one hand, I’ve always said to my kids, “I really don’t want you to go into this business. I think it’s really hard and can be emotionally devastating. On some levels, it’s a kind of self-centered business. I think you should do something else.”

SheKnows: You must have felt strongly about her gifts as an actress to encourage her to be on The Closer, even though you personally knew the business was so difficult. 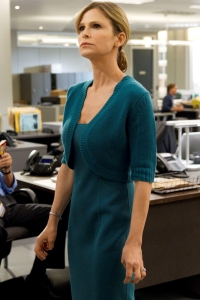 Kyra Sedgwick: As far as The Closer is concerned, that was a different situation. Because (The Closer producer) James Duff had seen her in a film that I produced, Kevin (Bacon) directed and I starred in, Loverboy, when she was about 12, or maybe even 11. And she was really great in the film. He said to me, “I really want her to be on the show.” And I said, “Well, that’s something you have to talk to her about. I’m not her manager.”

SheKnows: When we last spoke, you told me about the 25-year vet of the LAPD being on set. How does his influence improve things as the seasons go on?

Kyra Sedgwick: It’s always really helpful to go to them for background information. I always can get really wonderful, very specific details about background from the horse’s mouth, so to speak [laughs].

Read on for more Kyra Sedgwick