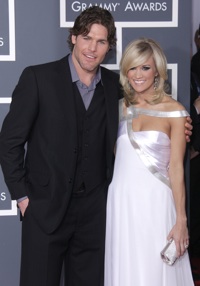 The award-winning singer and the hocker player tied the knot at the Reynolds Plantation in Greensboro, Georgia.

Carrie Underwood wore a white Chantilly lace dress by Monique Lhuillier. Sadly, her manager reports, they have no plans to release any photos to the media so we can’t gawk over the gown.

The newlyweds released their first statement as celebrity husband and wife, telling People, “We could not feel more blessed to have found each other and to have shared this day with our friends and family that mean so much to us!”

read on for more on celebrity love & marriage!