Gossip Girl star Taylor Momsen says you can skip the Miley Cyrus comparisons, if you please. 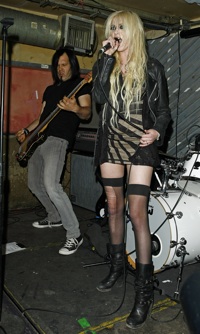 Momsen told FHM UK: “I’m not looking to be Miley (ex?pletive) Cyrus?. I don’t care about the fam?e. I do it because I love m?usic. I like making records and if people lik?e them, then we’ll go along? for the ride. I’m not dissing Miley personally?. However, I do think the Disney bubblegum (expletive) t?hat the world is living right now is pathetic. I thought we passed that r?epression???,??“? ??M?o?m?s?e?n? ?s?a?i?d?.?

“??????I don’t know Miley, but musically we’re different. To compare us because of our age is silly. People will be surprised by the record. I mean, it’s a rock record. I get that there is this blonde thing from Gossip Girl and they’re expecting pop (expletive)?, but it’s a rock band and it’??s heavy. Our record is a life record. It confronts everything head on. It’s death, love, drugs, sex, religion, politics.”

What is up with these teens not wearing pants, anyway? Taylor Momsen said WTF do you care.

Yet another difference between Taylor and Miley: Taylor Momsen is surly, while Miley Cyrus just feigns innocence.