Lindsay Lohan just can’t stay out of the headlines. Lindsay Lohan’s lawyer has quit after Lohan was sentenced to 90 days in jail. 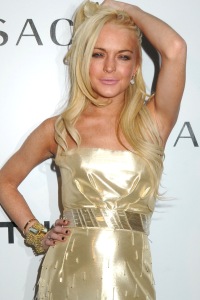 According to Radar Online, Shawn Chapman Holley resigned from her position as Lindsay Lohan’s lawyer when she heard her former client was out looking for new representation.

Before she stepped down as Lohan’s attorney, Holley released a statement regarding her client’s ruling saying, “Ms Lohan and I are extremely disappointed in the sentence handed down by Judge Revel.”

Her statement continued, “We believe that the penalty is far harsher than what others would have received under similar circumstances. The reality is that Lindsay Lohan, like most defendants, had to balance work commitments with court requirements. To be punished so severely for doing so, particularly in light of the fact that she substantially complied with each of her probationary conditions, is harsh and unfair. That said Lindsay Lohan is prepared to serve her jail time and to comply with the Court’s orders.”

As for Lindsay Lohan’s off-color statement on her fingernail in court, Holley said, “The fact is, the words could barely be seen by the naked eye.

“That a courtroom camera, purportedly there to accurately chronicle the proceedings, would use a telephoto lens to zoom in, as it did to Lindsay Lohan’s fingernail, is a commentary on the entire issue.”

Despite rumors that Tiffany Feder-Cohen, who was just admitted to the California bar in November, would take over as Lindsay’s counsel, Dina Lohan’s attorney, Stephanie Ovadia, told Radar Online, “Tiffany Feder-Cohen is not Lindsay’s attorney and never was. She is just a good friend who is helping out.”

Her new lawyer will be announced later in the day.