Has it been raining frogs? Where are the swarms of locusts? Has the apocalypse begun? On July 7, professional party girl Lindsay Lohan missed her own 24th birthday bash, choosing instead to stay home with Kim Kardashian and eat Chinese food. 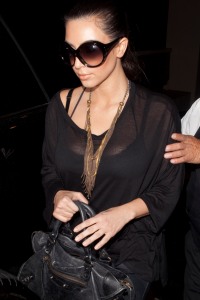 Gasp! What else could that be other than a sign that the end is near?

People magazine is reporting that a source told them, “Lindsay was planning to celebrate her birthday with the owners of Las Palmas, who are like family to her, and her friend Ferras, who was also celebrating his birthday that night,” but decided to pull a no-show at the last minute.

Does it occur to anyone else how wrong it is that Lindsay Lohan, who is supposedly a “recovering” alcoholic and drug addict, considers nightclub owners to be like family? She’s totally the Norm of Hollywood Boulevard. It is so very tragic.

According to People, her friend Marcus Molinari tweeted around midnight, “Lindsay is not having her birthday @laspalmas! She is at home with friends and family!!! We wish her well and love her!”

Instead, Lindsay Lohan was sentenced to 90 days in the pokey this week, spent the evening with her mother, sister, assistant, and Kim Kardashian, who was snapped walking into Lindsay’s place carrying takeout from Chin Chin, an Anglo-fied Chinese restaurant chain in Los Angeles popular with the low-carb, low-fat crowd.

Lindsay Lohan is scheduled to begin serving her 90-day jail sentence, followed by a three-month stint at an inpatient rehab center, on July 20 and is reportedly freaking out. Another source told UsMagazine.com that Lohan is “not handling this well at all. She’s at her lowest.”

This is her lowest? Not when she was careening all over the Pacific Coast Highway trying to run her assistant down?

Oh, please. We have no sympathy.

Lindsay Lohan is a girl who’s frittered her life and career away and been given constant leniency by everyone around her, including the legal system. Last time she was in the clink, she served only 84 minutes behind bars.

This isn’t Robert Downey Jr we’re talking about. Lindsay’s greatest creative contribution to the world has been Mean Girls. Give me a break! She’s a drug addict whose time in the spotlight has been over for years. Let her go to jail and rehab, get herself together and start living a life of normalcy. Spending a birthday at home with family and Chinese food shouldn’t be a sign of Judgment Day; it should be seen as a step in the right direction.