Julianne Moore and Annette Bening star as the mothers of teenage children, Joni as inhabited by Mia Wasikowska and Josh Hutcherson as Laser. 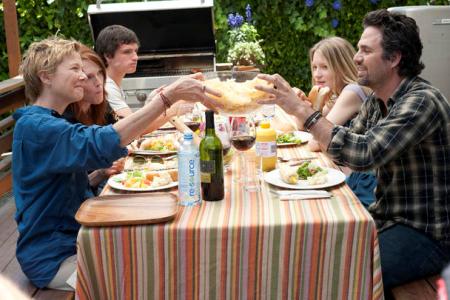 Joni is heading to college in the fall and it is the family’s final summer vacation before the empty nest gets exponentially larger. At the bequest of her brother, Joni seeks out their sperm-donor father. Enter Mark Ruffalo and one of the most sensitive, subtle and sensational performances of 2010 as Paul.

Paul is at a crossroads in his life. Sure, his organic restaurant and farm are blossoming business-wise, but he feels empty. Enter Mia Wasikowska and Josh Hutcherson’s Joni and Laser. What begins as an uncomfortable family reunion of discovery splashes into a sea of complications that mirror the struggle of each family in America. Julianne Moore and Annette Bening’s parents are no different than millions who grapple with the self-discovery questions our children ask that rattle the foundations of the complication-free world we perceived we had.

The Kids Are All Right is all writer-director Lisa Cholodenko with her feel-like-acting-camp scenes populating a film that packs an emotional and visual punch. Los Angeles has never felt so anonymous in a film in years and this LA story succeeds because of it. The city is not a character as so many terrific Robert Altman-type films have embraced. As such, the story unfolds and what the audience gets is as rich of a character study on film as we have seen in 2010. Yes, I said it: The Kids Are All Right is the best film of 2010, thus far. 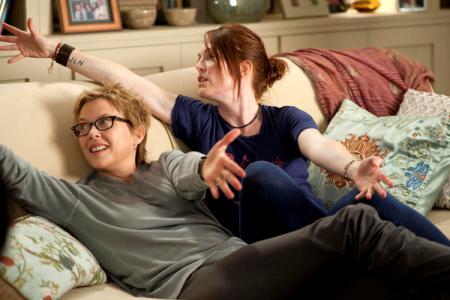 As much of the Oscar buzz surrounds Annette Bening and her performance, which is super-human, four-time Oscar nominee Julianne Moore rivets. The two stars of The Kids Are All Right that may be eclipsed by their high-powered and deservedly-so headliners in Bening and Moore, are Mia Wasikowska and Mark Ruffalo, who shine as they never have on screen.

Ruffalo, for one, turns in the performance of his acclaimed career. Wasikowska arrives on screen and announces to the world that this is one star to keep the focus on as her career heats up.

The Kids Are All Right review

Despicable Me
The Last Airbender
Eclipse