After Lindsay Lohan received a 90 day sentence, 30 days for her first DUI, 30 days for the second and 30 days for reckless driving, as well as 90 days in an inpatient substance abuse program, how did Lindsay Lohan’s family react? They started complaining. 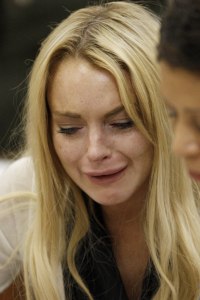 “This is so not fair to my child!” Dina Lohan whined to AOL’s Popeater.

No, Dina, what’s really a travesty is that Lindsay is saddled with an enabler fame whore of a mother who has no interest in her child’s well-being, not to mention lousy grammar (the word you’re looking for is “unfair,” as opposed to “so not fair,” unless you’re a 13-year-old who’s throwing a tantrum).

Your daughter is slowly killing herself, Dina. Let her hit rock bottom and get better, even if it means you have to find a new gravy train.

Lindsay Lohan’s father, Michael Lohan, took to Larry King Live on Tuesday night and said he felt “dismay, but, at the same time, a little satisfaction that she’s going to a rehab. But the last thing in the world I wanted was for my daughter to go to jail…This girl needs a rehab, she needs help. [Dr Drew] wanted to help her; he offered to help her a long time ago. If Lindsay’s lawyer and Lindsay would have just listened to us, she would have been in a rehab, she would have been on a way to being clean and sober and have her life back. Instead, she got jail and rehab.”

Those are surprisingly sane words from Michael Lohan. What’s this world coming to? 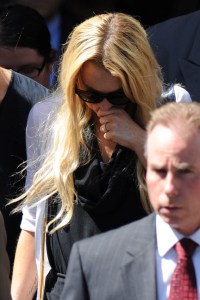 Celebrities took to Twitter after the sentencing, some, like Kim Kardashian, offering words of support, while others, who we prefer, offered gems like “Jail has been sentenced to 90 days of Lindsay Lohan” (courtesy of Avatar actor Joel Moore) and “I refuse to discuss Lindsay Lohan tonight…I told her to stop doing lines off her mother’s fake nails” (from Chelsea Handler).

Lindsay Lohan must surrender on July 20 to begin her sentence which will most likely be carried out at the women’s Century Regional Detention Facility in Lynwood, California, the same jail where she served 84 minutes of a 24-hour sentence about three years ago. It’s also where Paris Hilton did her time in the pokey.

If Paris Hilton can do it, Lindsay Lohan will be just fine.