The Kids Are All Right was an acting camp of the highest order for Julianne Moore. Entering her third decade as one of America’s premier actresses, the Oscar-nominee possessed the enthusiasm of a teenage girl when speaking about her latest triumph as a mother at a crossroads in The Kids Are All Right. 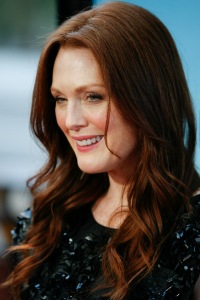 Julianne Moore stars opposite Annette Bening as part of a lesbian couple raising two teenage children who out of left field decide to find their sperm-donor father.

Hilarity does ensue, but there is so much more magnificent about The Kids Are All Right than smart comedy.

Julianne Moore has had a career only a few actresses have dreamed of achieving. Julianne Moore also holds a distinction only 11 other people in Academy Awards history have accomplished: Moore earned two acting Oscar nominations in the same year back in 2002! Her nominations came for Far from Heaven and The Hours. Moore has also been nominated two other times, for The End of the Affair and Boogie Nights.

But it is Moore’s performance in The Kids Are All Right that has her earning Oscar buzz unseen before in her career. Considering Julianne Moore’s Academy Awards history, that is saying an enormous amount! 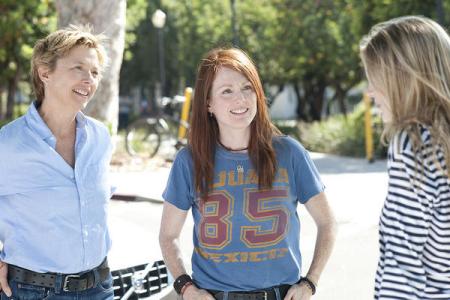 Julianne Moore tells us exclusively in our video interview how the legend in her own time managed to get Mark Ruffalo to say yes to making The Kids Are All Right. It’s bloody brilliant.