Despicable Me is cinematically unique in every way except one — its ability to move the audience. Whether in animated form or live action, the movies move us when they get it right. Despicable Me moves you and so gets it right.

Facetiously funny, Despicable Me arrives in theaters July 9 with a stupendous cast, led by Steve Carell as Gru, someone motivated to be the world’s most loathed villain. 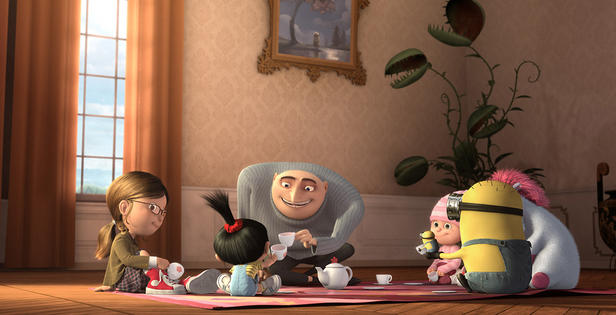 Carell is joined by Julie Andrews as his mother, Jason Segel as his nemesis Vector, Russell Brand as his mad scientist sidekick and iCarly’s Miranda Cosgrove as the oldest of three orphan girls who steal Gru’s heart while he is simultaneously attempting to steal the moon.

Despicable Me: Minions make their mark

Despite Despicable Me’s amazingly talented cast, the characters who steal the show are Gru’s minions.
Widely seen in the film’s trailer as well as in several national sponsorships, the minions make the most of their time on screen as directors Chris Renaud and Pierre Coffin find humor in the most unlikely of places — language-less animated characters that are simultaneously delightful and devilish. 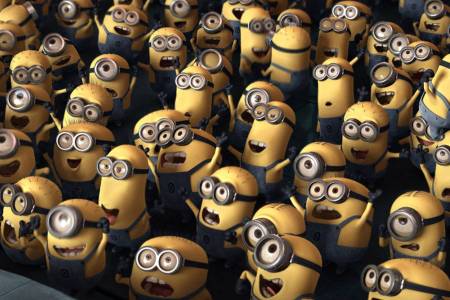 The minions may dominate the water cooler talk as to what’s great about Despicable Me, but the characters led by Steve Carell as Gru and the film’s script are what truly create a magical summer film.

Gru, as voiced by Steve Carell, is a complex character regardless of whether he’s animated or a live action villain. There are plenty of parental issues to go around in Despicable Me. Jason Segel’s Vector is only evil because of his desire to please daddy. Carell’s Gru is continually seeking ways to humiliate and humble the human race to make his mother proud.
Steve Carell has managed to find an accent for Gru that is perhaps Eastern European, but not quite. It’s one part Arnold Schwarzenegger, another part Sound of Music’s Herr Von Trapp, and all Steve Carell. 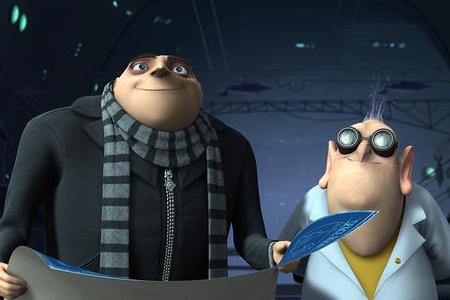 Because of Carell’s ability to make Gru likeable, the audience can silently cheer while he struggles with the same frustrations that annoy us all. What if there’s a long line at Starbucks? You’re a super-villain after all, whip out your freeze-gun and the front of the line is yours! Any other actor would have pushed this power to the point of ridiculousness, but with Steve Carell voicing Gru, audiences can pull for him as he competes for villainy’s top dog, while managing the surprisingly sensitive world of parenthood.

Gru has adopted three little girls believing that they are the key to toppling his nemesis, Vector. When they go out and sell their cookies, only the three little children can gain access to an aspiring super-villain’s requisite heavily-armed evil lair, otherwise known as Vector’s home.

Despicable: Wouldn’t want it any other way

Despicable Me also charms with a slightly different from the norm animation style. Drawn with a nod to the darker elements of animation’s character scheme, the palette is a study in contrasts. The dark, gothic world of Gru and the world of the orphans, whose disposition for life brightens every scene they’re featured in, are delightful contrasts. 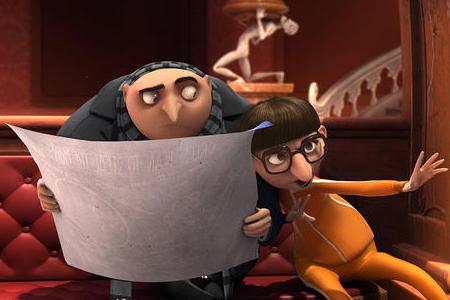 The performances in Despicable Me are top notch. Of course Steve Carell excels, but Jason Segel shines as the evil villain in the making Vector, and iCarly’s Miranda Cosgrove gives her character Margo street smarts with a warm heart. And then there’s the legend — Julie Andrews as Gru’s mother — who crafts a performance that with limited screen time, shows that Gru’s apple does not fall far from the tree.

Eclipse
The Last Airbender
Get Him to the Greek