Lindsay Lohan has been sentenced to 90 days in jail for breaking the terms of her probation. 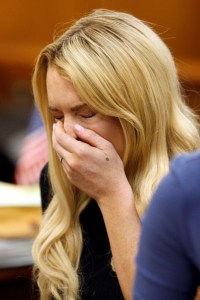 The 90-day sentence came as a clear shock to Lindsay Lohan, who immediately wept upon hearing the news.

What’s also interesting is that Lohan will have to complete a 90-day substance abuse program once she is released.

Lohan sobbed and pleaded with the judge to be lenient on her, clearly to no avail.

Lindsay Lohan jail: How it went down

All eyes have been on the Lindsay Lohan DUI drama for months now. Today, the judge sentenced Lindsay Lohan to 90 days in jail, leaving the movie star in tears.

When Lindsay Lohan missed a Los Angeles court appearance back in May, Judge Marsha Revel slapped her with the now infamous SCRAM device, as well as random drug testing and more alcohol education classes, but that court date was just the first round.

Tuesday, the Mean Girls star was back in court to determine whether or not she actually violated probation by missing alcohol education classes.

According to court testimony, it seems Lohan did in fact flake out on her classes — to the count of nine missed classes! Even worse, according to program operator Cheryl Marshall, there was a day where Lohan’s signature appeared on the sign-in sheet, but she wasn’t there.

Revel gave Marshall a slap on the wrist for not keeping the court apprised of Lindsay Lohan’s attendance issue.

After recounting Lohan’s repeated lies about partying and drinking, Revel said, “It’s like someone who cheats but doesn’t think it’s cheating if they don’t get caught.”

Clearly wanting to leave an impression, the judge ruled that Lindsay Lohan will spend 90 days in jail, followed by 90 days in an inpatient rehab program. Lohan must turn herself in to do the time by July 20.

The new 90-day sentence only reflects Lohan’s parole violation of failure to attend classes, not the fact that Lohan set off her monitor the night of the MTV Movie Awards, June 6.

Lohan broke down at the sentencing, but even before hearing her fate, she went on the defensive.

“As far as I knew I was in compliance with my programs,” the star claimed. “I wasn’t trying to get special treatment. I have to provide for myself. I have to work. Having said that, I did everything to balance my jobs and showing up. I’m not taking this as a joke. It’s my life. It’s my career…I take responsibility for my actions. I’ve tried to do the best I can. It’s been such a long haul; I don’t want you to think that I don’t respect you.”

The question on everyone’s minds now is whether Lohan will actually do that time. Revel’s frustration may lead her to push for the starlet to do the entire stint, but issues like jail overflow have helped out quite a few celebrities heading for lockup.

In fact, back in 2007, when this case first hit the courts, Lohan did her own stint in prison. It lasted all of 84 minutes, after which she was given three years probation.

Do you think Lindsay Lohan will do her time now that she’s broken that parole?

Check out the video of her being sentenced!