The Twilight Saga: Eclipse and The Last Airbender created a blockbuster Fourth of July weekend. Eclipse came in first place, but the numbers reflect a slight decline in the Twilight fandemonium. Also, in a surprising move, the indie flick Cyrus jumps into the mix.

Eclipse had a massive first day at the box office, bringing in $66 million, but the weekend didn’t match that momentum. The first day take almost beat the weekend count of $69 million. 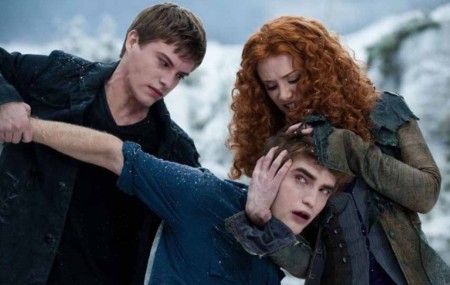 Those numbers aren’t bad, unless compared to the previous Twilight Saga installments. The weekend’s performance was enough to earn Eclipse the third place spot for all July 4 weekend openings, but it wasn’t enough to beat out Eclipse predecessors. New Moon banked $142.8 million its first weekend, while Twilight opened with $69.6 million.

With Monday’s holiday, Eclipse was able to boost its numbers up to $82.5 million, bringing the film’s six-day count to $175.3 million. This again falls short of New Moon, but doubles Twilight’s $88.1 million.

A decent opening for The Last Airbender may be one cause of the slight Twi-slump. The action fantasy brought in $40.5 million.

Toy Story 3 dropped to third, with $30 million and from there, the box office order stayed the same as last week. The Adam Sandler, Kevin James, Chris Rock, Rob Schneider, and David Spade comedy Grown Ups dropped with the toys, coming in fourth with $19 million. Knight and Day was bumped to fifth, with $10.4 million.

The dark indie comedy Cyrus, which stars John C Reilly, Jonah Hill, Marisa Tomei and Catherine Keener, bares mention for jumping from 20 to the final spot in the top ten, with $774,000. Still in a limited run, this LA story is set to continue to open in new markets over the next two weeks and could turn into a breakaway hit.