Lindsay Lohan entered a Los Angeles court with high hopes of having her probation ended as well as having her SCRAM alcohol monitor bracelet removed. 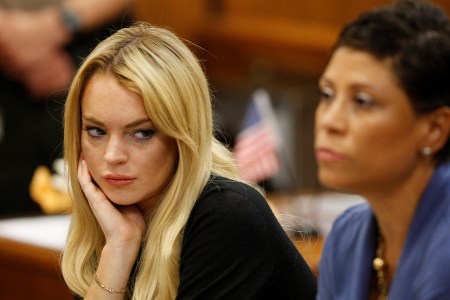 Lindsay Lohan arrived ten minutes early for her court appearance on July 6 looking good and dressed casually and conservatively, in a black top with sleeves and dark slacks.
However, the Lindsay Lohan hearing was delayed for more than two hours when the prosecutor, Danette Meyers, asked for time to review records from Lindsay Lohan’s alcohol counseling program. The prosecutor maintains that Lohan, 24, has clearly violated the judge’s order.

Witnesses testified regarding Lindsay Lohan’s attendance in the alcohol education program in the Los Angeles area that she was required by law to attend. The SCRAM alcohol detection bracelet Lindsay Lohan wears on her ankle measured an alcohol level of .03 at midnight on June 7, but reported a .00 reading at 4 am.

Lindsay Lohan denied she had been drinking.

Los Angeles County Superior Court Judge Marsha Revel said that her alleged consumption of alcohol last month will not be considered as a possible probation violation. Revel said she will only consider whether Lindsay Lohan failed to complete the required number of alcohol education courses on time. If Lohan was found in violation of her probation, she could be sent to jail.

Lindsay’s father Michael Lohan was present but his request to address the court was denied. The Judge did allow him to give her a written letter. He’s made no secret that he’d like the court to order his daughter to attend alcohol and drug rehab.

Lindsay’s bail is set at $200,000. She is becoming better known for her multiple court appearances than she is for her movies.