After rumored romances with Smashing Pumpkins’ frontman Billy Corgan and Hurt Locker star Jeremy Renner, Jessica Simpson is officially back in the dating game, but not with a rock star or actor. She’s hooking up with another football player, Eric Johnson. 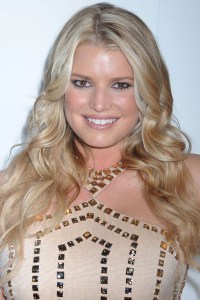 Since Eric Johnson is no longer playing, there’s no chance of anyone blaming their losses on Jessica Simpson.

People Magazine reports that a source close to Jessica Simpson has confirmed the relationship and says the pair has been together since May.

Adds a friend of the singer, “She is happy that she found a great guy. She’s really happy.”

We get it. Jessica Simpson is happy. Really happy. So happy she doesn’t care that John Mayer called her sexual napalm and Romo is rumored to be engaged to the girl he started dating right after Simpson, Chace Crawford’s beauty queen sister, Candice. Thanks for the super redundant quote.

Looks like Jessica Simpson got herself a brand new bag just in time for her 30th birthday this Saturday!