Melissa Etheridge has filed a Petition for Dissolution of Domestic Partnership from wife Tammy Lynn Michaels. 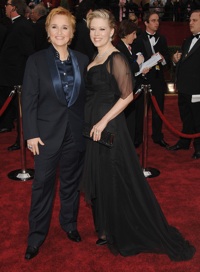 The couple separated months ago, but the legal move still shocked Tammy. In fact, she says the first she heard of it was on TMZ, like the rest of the world.

As she did after Melissa first announced the separation, Tammy took to her blog to discuss this latest development. She wrote:

“i am wondering if it’s an art
gentle waves
no noise for awhile
or maybe gentle voices
and
Smack!
Files for divorce!
even though we both promised
agreed
handshook
pinkyswore
no filing until after tour
in the fall
her broken promises
told to me by
headlines
i’m raising the kids
doing what i can
second set of yours
could you stop blind sighting me?
unless it’s another art form you’re working on?”

Tammy also claims in an earlier blog post that Melissa Etheridge hasn’t given her or the kids any financial support and that she has had to scrounge and borrow money to pay for gas and food for the kids.

“The other week i had to borrow money from a friend. Two weeks ago I had to scrape together $1.25 to pay for gas. I know she doesn’t want to give me money. Trust. I’m borrowing cash left and right from people to get through this summer, and feed my kids, with a stomach full of ulcers, thank you…

“So now… to open the laptop…and read the headlines…when i just spoke to the fame crawler yesterday… she could have mentioned it…and hmmm…wants some custody of kids…interesting…but no money support for me…interesting as well…so interesting, there, Melissa. Practicing what we preach is always hard for Americans, I think.”

In the filing, Melissa Etheridge has asked for joint custody of the couple’s two children (both borne by Tammy via artificial insemination) and for the judge to reject any chance of spousal support for Tammy Lynn Michaels.

read on for more celebrity divorce