Lindsay Lohan celebrated her 24th birthday by getting punched in the face. 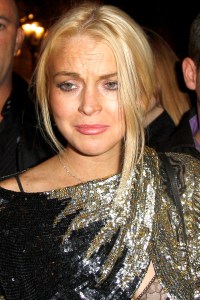 It was the 24th birthday of Lindsay Lohan. When she slipped on her thigh-high boots and planned to celebrate with close friends, she could never have anticipated how the night would end.

Lindsay Lohan and friends went clubbing and while at the club Voyeur in LA early Friday morning, a waitress approached Lohan and punched her in the face!

Witnesses said that the attack was unprovoked. Lindsay Lohan soon twittered that she was punched for no reason. However an eyewitness told Usmagazine.com that the waitress in question was angry with Lohan because she was hanging out with Doug Reinhardt, an athlete and entrepreneur and also Paris Hilton’s ex.

Witnesses said that the waitress has a history with Reinhardt. “She was jealous, and out of nowhere, the waitress punched her in the face! Doug didn’t want any part of it and went to the other side of the booth. Lohan ran out,” said one witness.

When the group moved to the nearby Rockstar House, the waitress followed her. At this point Lindsay Lohan was seen crying. The news never ends for Lindsay Lohan, does it?