Becki Newton and hubby Chris Diamantopoulos are expecting their first child! Newton was set to play a virgin in her upcoming series Love Bites. That’s a no-can-do with a Becki Newton pregnancy! 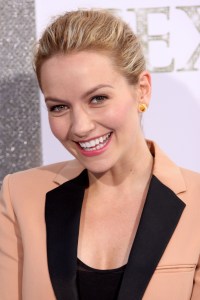 Becki Newton and Chris Diamantopoulos, who both star in Girl Crazy, found each other in one of those true New York moments. He spotted her in a subway station and feigned being lost so he could talk to her. The couple married in 2005 and now, word is they’re expecting their first child.

Because of Becki Newton’s happy news and a few behind the scenes shakeups, NBC’s new one-hour romantic comedy Love Bites, has been pushed to a mid-season premiere — with a non-celeb The Apprentice taking its intended fall timeslot, Thursdays at 10 pm.

One issue the show faced this month was Becki Newton’s baby news, which doesn’t quite gel with her story in the pilot episode. “She plays a virgin, so we have to make adjustments to that,” said executive VP-current programming Vernon Sanders. 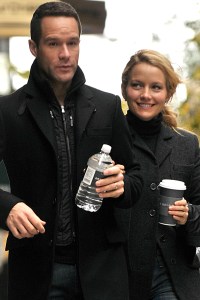 The show has also lost one of its main castmembers, Jordana Spiro, due to her gig on the series My Boys. No word on what that means for her My Boys costar Kyle Howard’s involvement.

There is an even bigger setback for the show, however, which is likely the real cause for the time bump. Love Bites creator Cindy Chupack has stepped down from her role as showrunner, citing personal reasons.

“Launching an anthology series, which breaks the form in so many ways, is a huge undertaking, and I strongly feel that I can be most helpful not showrunning, but writing,” Chupack said in a statement. “It just became clear that for several reasons, some of them personal, this change (and a little more time) is what we need to launch this show properly.”

SheKnows is intrigued by the new series and hopes the behind the scenes shakeups don’t end up killing the show.

In the meantime, Apprentice fans will get an extra dose of Donald Trump.

Congrats to Becki Newton and Chris Diamantopoulos on the baby news!