Burlesque makes a comeback on November 24 when Christina Aguilera makes her big-screen debut in the movie musical Burlesque. Aguilera stars alongside a living legend — Cher. The first photos from Burlesque have been released, offering a little more insight into the film directed by Steve Antin.

Steve Antin is the brother of Pussycat Dolls founder Robin and celebrity hairdresser Jonathan, who also co-wrote a draft of the script with Diablo Cody (Juno, Jennifer’s Body) before Susannah Grant (Erin Brockovich, In Her Shoes) stepped in and revised what was surely a hack-tacular disaster. 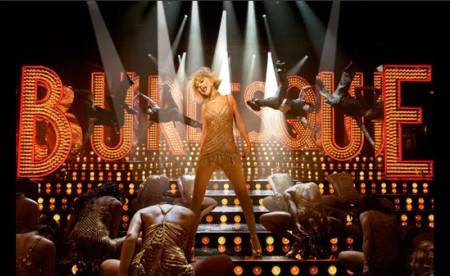 The film follows Ali (Christina Aguilera), a small town girl with a big time voice who moves to Los Angeles to follow her dreams of being a singer. Taking a page from the Coyote Ugly playbook, she gets a job at the Burlesque Lounge, a once resplendent theater that’s now ailing, and falls under the watchful eye of owner and musical revue headliner, Tess (Cher).

Starting out as a cocktail waitress, Ali dreams of headlining just like Tess does and starts to build a community in the theater, including befriending a featured dancer (Julianne Hough), having run-ins with a troubled, jealous co-star (Kristen Bell), and catching the eye of a bartender and musician (super studly Cam Gigandet). 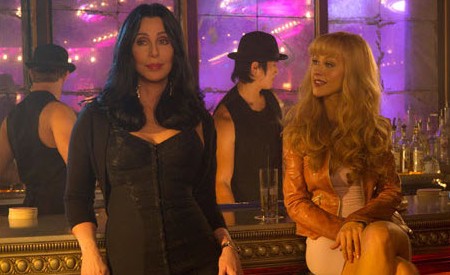 Speaking of young, Cher looks amazing! The work works. Cher’s even hotter than Christina Aguilera. For all those fans who missed out on seeing her stage show in Vegas, for a mere $12 bucks, they have the chance to see the supreme diva in action at their local megaplex.

The new Burlesque shots look pretty amazing and we’re gonna go ahead and make an early prediction that Burlesque, at the very least, chalks up an Oscar nomination for wardrobe.