Mel Gibson has been facing off in court against baby mama Oksana Grigorieva in an ugly breakup and custody case. Court documents have been sealed, but now, excerpts from a horrifying audio tape have been leaked. In explosive arguments, Mel Gibson unleashes an onslaught of nasty, sexist and racist slurs that make his infamous 2006 rant look tame. 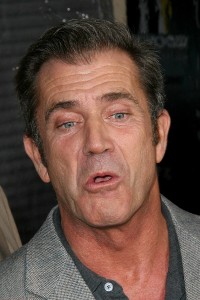 Mel Gibson and Oksana Grigorieva have been going at it for weeks over their breakup and the future of their 8-month-old baby, Lucia. Now, Radar has gotten its hands on a recording Grigorieva made of the pair arguing and Mel Gibson’s behavior is beyond ugly.

In the audio tape, which TMZ has confirmed exists, Mel Gibson threatens to burn Grigorieva’s house down and throws out some seriously offensive and derogatory words, but that’s not the worst of it.

“You’re an embarrassment to me,” Mel Gibson said on the tape, according to Radar. “You look like a [expletive] pig in heat, and if you get raped by a pack of n***ers, it will be your fault.”

As to why the tape exists, word is Grigorieva made the tape when they were breaking up this past spring and her goal was to protect herself after Mel Gibson began threatening her life. Word is she also held onto some nasty emails.

“Oksana’s motivation for recording this was to show Mel how mean he was, and because she feared for her life,” says a Radar source. “She wanted to get evidence that he was dangerous and violent.”

This clearly is a step up — or down — from the rant that got him in trouble back in 2006, after he was pulled over for suspicion of DUI.

In that infamous freak out, he called the officer “sugar tits” and ranted, “[Expletive] Jews… The Jews are responsible for all the wars in the world.”

After the uproar that ensued, Gibson apologized and hit rehab and anger management classes. Clearly, he still needs to work on his issues.