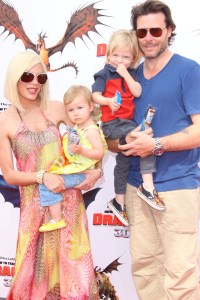 “Thanks for the well wishes,” Dean McDermott tweeted to fans from ICU today. “A collapsed lung is no fun, and is a lengthy heal. Feeling pretty bad today. Day 2 is always the worst.”

Word is Dean McDermott was out for a ride with two friends and after a crash left him immobile and bleeding, he was rushed to a hospital.

“At first I was mad,” Tori Spelling tells People. “I was pissed that he was out biking and crashed. But when I showed up and saw him lying there, and they told me they were admitting him to ICU with a collapsed lung, my heart dropped. My biggest fear had come true.”

McDermott’s proclivity for two-wheeled speed was an issue of contention on this season’s Tori & Dean: Home Sweet Hollywood. The reality star’s Facebook pic is a racy motorcycle shot and he goes by the twitter handle Deanracer, but after breaking his shoulder earlier this year, he agreed to stay off motorcycles, at least professionally.

Now, Tori Spelling’s other half is on the mend in ICU, as if to prove her side of the argument. That’s why this Tuesday’s crash will officially be Dean McDermott’s last. Spelling told People her hubby has agreed to stay off the bikes for good.

“He’s in a lot of pain,” Tori Spelling said. “He’s taking this as a sign and realizing family is too important to risk his life.”

The couple, who renewed their vows in May after rumors that there was trouble in paradise, shares two kids, Liam, 3, and Stella, 2, and recently revealed they want more. Dean McDermott also has son, Jack, 8, from his first marriage.

SheKnows sends wishes of a speedy recovery to McDermott, who is expected to make a full but not easy recovery.

Read on for more Tori Spelling