Wonder Woman is getting a makeover after six decades of wearing the same, skimpy outfit. 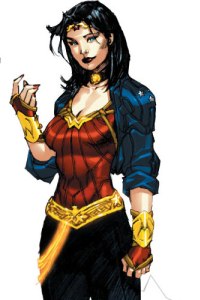 DC Comics co-publisher Jim Lee unveiled the new Wonder Woman costume to fans online yesterday. This tougher new persona is part of a darker, contemporary storyline that is expected to acquire a larger fan base.

Wonder Woman’s new outfit is described as a less revealing and a more universal costume, not as focused on the American flag.

Her magical accessories have also been revamped.

Gone are the bracelets, tiara and lasso. Black leggings and a cropped, midnight blue jacket complete the street-fighter ensemble.

Wonder Woman made her debut in an issue of All-Star Comics in 1941. It’s not her first image change. In the 1960s she adopted a mod look and took up martial arts.

In the 1990s, she donned a black leather outfit when the mantle of Wonder Woman was briefly assumed by Artemis, another DC character.

Superman, Batman and Wonder Woman are regarded as the core DC Comics heroes.

Writer J Michael Straczynski has created a storyline that changes her backstory. The super heroine and her new look is featured in DC comics Wonder Woman number 600, which is available in comic book stores June 30.