Eclipse debuted to a record-breaking $30 million in box office earnings solely from the midnight showings across the country. 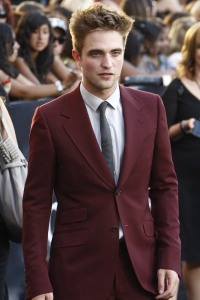 The New York Times said Eclipse was “a more robustly entertaining film than either of its predecessors” with added humor, more violence and “true to the film’s title, a deeper intimation of darkness.”

Eclipse has enhanced its romantic storyline and again features a love triangle between Edward Cullen (Robert Pattinson), Bella Swan (Kristen Stewart) and Jacob Black (Taylor Lautner). In one of the best scenes from the movie Jacob tells Edward, “Let’s face it, I’m hotter than you.”

Roger Ebert of the Chicago Sun-Times said while part of the movie didn’t work, including the special effects, “the audience watched this film rapt with attention” and in summing up said, “The Twilight movies are chaste eroticism to fuel adolescent dreams.”

If you know a teenage girl, you might want to see this film with her just to watch her face when the guys are on screen!