Lindsay Lohan is being sued by an upscale boutique over a massive shoe bill. 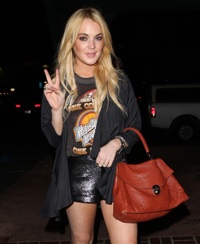 TMZ reports Lindsay racked up a whopping bill at Church, an exclusive boutique selling pricey clothes and accessories, including shoes — to the tune of over $17,000.

Lindsay Lohan had quite the scam going on: She convinced the owners of the shop that her business manager would pay for her purchases then would waltz out with the kicks.

Of course, they also thought Lindsay Lohan has “well known status as a movie actress with substantial income.” Hilarious!

Lohan’s camp had no comment on the litigation, as they’re busy wading through other huge legal messes like the lawsuit over a car accident and her DUI probation issues.