Paranormal Activity 2 has been green lit and it has us immediately thinking of another cult horror hit and its unsuccessful sequel. Anyone remember Blair Witch 2: Book of Shadows? Of course you don’t. It is because it tanked and no one saw it.

You can’t capture lightning in a bottle twice — paging Dirty Dancing 2: Havana Nights! Breakout sleeper successes with crappy sequels prove that over and over, but Hollywood insists on going back to milk an oft dried-up cash cow time and again, hoping for their next Saw franchise. 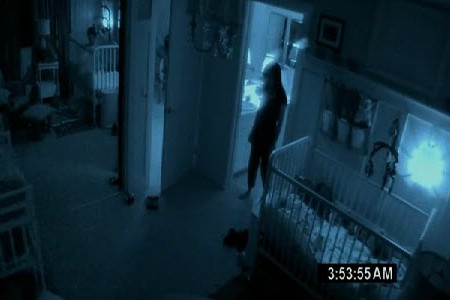 With the online premiere of a new teaser trailer for Paranormal Activity 2, the question is, will it be the next Poltergeist (gawk, those sequels were terrible) or the start of a new Nightmare on Elm Street or Halloween?

Paranormal Activity, the first truly terrifying film, about a couple who move into a potentially possessed house and set up cameras to record what happens while they sleep, was directed by Oren Peli on a shoestring budget of $15,000.

In a Cinderella twist, the film went on to gross about $200 million worldwide and became a sensation thanks in large part to an ingenious “Demand it in your city” campaign by Paramount Pictures that called on horror fans to spread the word via Twitter and Facebook and send requests to the studio to have the film expand to their hometown.

For the second film, Peli has been replaced by Tod “Kip” Williams and tens of thousands of dollars have given way to millions. Though no official casting news has been released to date and he did seem to die at the end of the first movie, Paranormal Activity 2‘s possibly returning star Micah Sloat recently told MTV, “We have money now, but we’re staying true to the heart of the movie, to the spirit of it, to the vision.”

His co-star in the original, Katie Featherston, who ended the first film appearing to be demonically possessed, also hasn’t confirmed whether or not she’ll be back. “I don’t know,” she told reporters at the MTV Movie Awards when they asked if she’d be reprising the role which earned her a nomination. “I’m waiting to hear. If they had a way to put me in there in a way that would be reasonable and make sense — I don’t know how they’d do that — I’d definitely be down for it.”

In the newly unspooled trailer, which honors original Paranormal hallmarks like the unique surveillance camera point of view, a shadowy figure appears toward the end that looks an awful lot like Featherston from what we can make out. Here’s hoping the second time is also a charm.

Paranormal Activity 2 is due in theaters this October.

Read on for more Paranormal Activity