Zoe Saldana is set to marry her longtime beau, Keith Britton, according to the newest celebrity buzz. The Star Trek and Avatar star’s rep tells Us Weekly Zoe Saldana “is thrilled” about her upcoming nuptials. 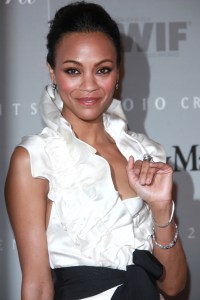 Sorry Jake Sully, looks like your Pandora princess is tying the knot with another man, but in all fairness, he had her first! Word is Zoe Saldana, 32, is marrying the man she’s been dating for a decade, 33-year-old Keith Britton.

“They’ve been together forever,” an Us source raves. “They’re a great couple.”

In Hollywood, ten years really does seem like forever! Apparently, one of the couple’s secrets to success has been in playing down their status, both in the press and with friends.

“She doesn’t even introduce him as her fiance,” another Us source explains. “She will just say, “This is Keith.” She likes to keep her personal life to herself and wants people to focus on her as an actress.”

Zoe Saldana’s efforts to keep their romance out of the gossip press may have hit a roadblock, however, now that the big engagement news is out!

Saldana’s man, Keith Britton, clocks in as CEO of My Fashion Database, but he also took a stab at acting. His last gig was a guest role on Cold Case back in 2007 and he did a three episode stint on the soap opera As the World Turns in 2002.

Zoe Saldana landed her first acting role back in 1999 with a guest gig on Law & Order and has been working the camera ever since, but her career went into overdrive after Avatar and Star Trek put her on the map.

She recently appeared in The Losers and the much more successful Death at a Funeral, and there’s more to come. The talented and tough beauty is set to appear in the star-studded heist flick Takers and the dark LA comedy Burning Palms, hitting theaters this year.

Zoe Saldana is also signed on to return as Spock’s number one lady, Uhura, in the Star Trek sequel, expected out in 2012, and is rumored to be working on Luc Besson’s Colombiana.

With all the busy starlet has going on, word is she hasn’t started thinking about wedding plans and isn’t too worried about it all. “She hasn’t stopped working to plan anything,” the Us source says.

Congrats to Zoe Saldana and Keith Britton on the big news — and good luck maintaining that low profile you’ve enjoyed for the past decade!

Read on for more Zoe Saldana