Katie Holmes in her own right has a Cinderella tale. Girl with all American looks gets the gig on a famous teen drama, eventually catches the eye of a good looking A-list actor — Tom Cruise — and now she’s playing the world’s most famous first lady, Jacqueline Bouvier Kennedy. 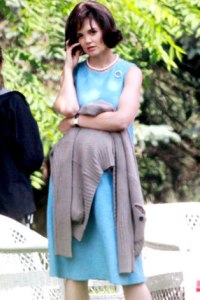 Katie Holmes has done it all since growing up on the set of Dawson’s Creek. She’s tackled the small screen and big budget blockbuster roles and as of late she’s been putting her dancing and singing skills to good use.

The triple threat talent and wife of Tom Cruise isn’t slowing down either. People magazine recently caught a glimpse of Holmes tackling the defining role of Jacqueline Bouvier Kennedy for the upcoming History Channel miniseries, The Kennedys.

Katie Holmes was on set in Ontario, Canada, baring an eerie resemblance to the former first lady and fashion icon. A trendsetter herself, Katie Holmes was photographed by People magazine donning a “Camelot-era” hairstyle and pearls with one accessory I’m sure Tom Cruise and daughter Suri Cruise just love — a prosthetic baby bump.

The airdate for the miniseries, The Kennedys, is not known at this time.

Read on for more Katie Holmes