Larry King is quitting. King, the man who gave suspenders the respect they deserve, is bidding adieu. CNN’s Larry King is signing off from Larry King Live in hopes of greener pastures and quality family time. 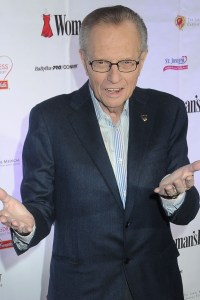 The 25-year-old Larry King Live show and its often-parodied 76-year-old host are being pulled into retirement to give Larry King a much-needed break. The anticipated buzz was confirmed in a statement Tuesday.

“I’m looking forward to the future and what my next chapter will bring, but for now it’s time to hang up my nightly suspenders,” Larry King officially commented.

CNN backed the host saying, “Having conducted nearly 50,000 interviews over 50-plus years in broadcasting, Larry deserves to take some time for himself and his family.”

With the swirling rumors of infidelity plaguing his married life with wife Shawn Southwick, it’s not a surprise Larry King would want to take the opportunity to focus on his personal life. The couple’s divorce plans were halted last month.

“We love our children. We love each other. We love being a family,” the duo confirmed to E!.

King’s creeping age and staple wardrobe have left him wide open for media puns and late night skit parodies, but his longevity and craft in the journalism world have made him a TV icon.

Larry King Live will usher out sometime this fall according to reports. Of course, Larry King can’t retire without some kind of comeback clause. The host will show up on the network for occasional specials.