Bryce Dallas Howard is an old friend of ours, after visiting with her exclusively on Terminator Salvation and her priceless performance in The Loss of a Teardrop Diamond. Now, Bryce Dallas Howard is joining a cinematic cult of another level completely — the world of The Twilight Saga. Howard’s debut in the franchise as Victoria in Eclipse, finds her tackling action and character complexities that joyously challenged the mother of two. 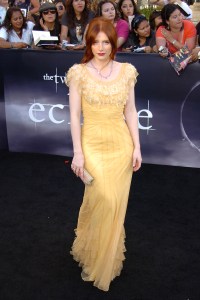 SheKnows: From a scale of Twilight newbie to Twilight Saga soul sister, where does Bryce Dallas Howard sit?

Bryce Dallas Howard: I had not only read the books, but one of my friends actually made this little pack of Post-It notes for me with Rob’s [Pattinson] face, that said, “Live dangerously.” All of my friends were like, “Why are you so obsessed?” I was just like, “It’s so dangerous. Their love is so dangerous.” It was very fast and it was very sudden.

SheKnows: Was entering the world of Twilight a little nerve-wracking?

Bryce Dallas Howard: To be honest, I was intimidated going into it, for a variety of reasons, but I felt so lucky to get to meet this group of people. It’s a group of people that have genuine friendships and are so deeply committed to doing justice to these stories, and who always put the character and the story first. Obviously, that’s translated, and I think that’s why the movies are as beloved as they are.

SheKnows: How was the experience of filming Eclipse different than what you’ve been accustomed to on film sets?

Bryce Dallas Howard: [Laughs] There was a lot of fight training that happened to prepare for it. Actors are always nervous about not only hurting each other, but perhaps hitting each other’s face and ending one’s career. So, there was a lot of preparation that made us feel more comfortable, certainly. I just knew that, if I tussled his hair, millions of young women would want to kill me, so I was quite cautious for that reason. It was fun. There’s a point at which you’re wrestling for six consecutive hours that it just becomes absurd. You just can’t help but laugh. It ultimately was great.

SheKnows: You getting the role happened kind of quickly. Take us through it.
Bryce Dallas Howard: Actually, quite ironically, I flew out on a Monday or a Tuesday to do the role, and that Friday before, I had dyed my hair really dark. My natural hair color is an orange-red, which is what is depicted in the book, but that Friday I dyed my hair really dark, and by Monday I had learned about it and flew out the next day. I showed up and they were like, “This is not the girl we hired.” Shooting had to start pretty quickly, so I wore a wig, which I was really happy about because it was really important to have continuity with the character. Even though my hair color was perhaps right, I felt that the texture and everything needed to be as exact as possible. 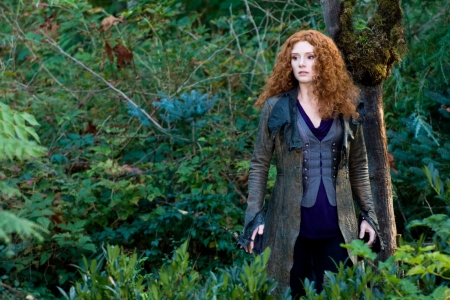 SheKnows: After being a part of the Terminator franchise and now joining another cinematic franchise, what is it about the Twilight Saga that most inspires you as a performer?

Bryce Dallas Howard: There’s definitely an epic scale to this movie and to this chapter of Twilight, that is probably unique and distinct to Eclipse. The story does culminate in this massive battle sequence, at the end. There are multiple threats, like the strife between the Wolf Pack and the Cullens, and there’s the Volturi, and Victoria is after Bella, and Riley is after Bella and the Cullens, and there’s a Newborn Army of vampires that now exists. It definitely became like an epic action film. 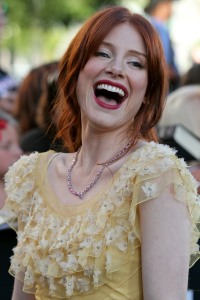 SheKnows: Filming Eclipse, what stands out as the most difficult moment?
Bryce Dallas Howard: The most challenging part for me was the big fight scene. Because there’s so much build up to that moment, there was so much training that went into the choreography of that final battle sequence and I didn’t want to mess it up. I certainly didn’t want to punch Robert Pattinson in the face.

SheKnows: Lastly, did you meet Stephenie Meyer when she was on set?

Bryce Dallas Howard: Yeah, it is intimidating to talk to Stephenie, although she is not an intimidating person. She’s a really, really lovely woman, and a very warm person. It wasn’t that I wanted to do anything different at all. It’s just that Stephenie wrote in the book, very clearly, that when Victoria spoke, she had a surprisingly high voice, almost like a little girl. So, I wanted to know more of what she envisioned, in terms of that, so it didn’t seem silly and I wasn’t doing a caricature of what she had written, but rather an honest depiction of what she had written.