Kristen Stewart appeared on the Late Show with David Letterman and came off as even more awkward than the Eclipse star usually does. 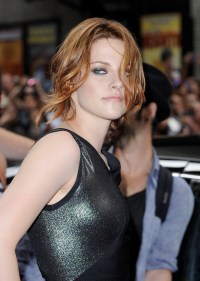 Kristen Stewart is making a name for herself again — but perhaps for the wrong reasons!

What kind of name? We’re not sure. Looking beautiful as usual but wearing a strange one-armed dress, Kristen Stewart appeared on the Late Show with David Letterman Monday night. Stewart was promoting her next film in the Twilight series, Eclipse, which opens June 30.

Kristen Stewart’s conversation with him was a little more awkward than usual. David Letterman asked Kristen about one of her dogs which looks very much like a wolf although she explains that they are actually wolf-dog hybrids.

Kristen Stewart becomes obviously uncomfortable and fidgety when David Letterman, who is a little freaked out, asks where you buy a wolf. When she interrupts him with a joke about hunters the look on his face is priceless!

Enjoy the clip below.