Megan Fox and Brian Austin Green have wed in a secret ceremony! 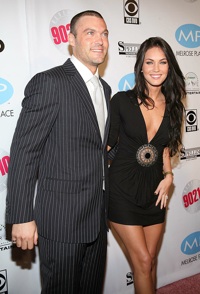 TMZ reports the longtime couple snuck off to Hawaii late last week and married in a tiny, intimate ceremony at the Four Seasons Resort on the big island with only a half-dozen people in attendance.

The Transformers star got engaged to the former 90210 hottie for the second time on June 1 at the same resort where they wed — and the same location where Fox lost her two-carat diamond minutes after the proposal.

The couple met in 2004 on the set of Hope and Faith. They have dated on and off ever since, with an earlier engagement broken for undisclosed reasons. The marriage is a first for both, although Green has an eight-year-old son with actress Vanessa Marcil.

Here’s hoping Fox’s face unfroze from the Botox overdose she was suffering from at the premiere of Jonah Hex, which has bombed at the box office.