Eclipse has finally premiered. Eclipse, the hotly anticipated addition to the Twilight Saga, premiered June 24 at the Nokia Theatre at LA Live in Los Angeles with stars Robert Pattinson, Kristen Stewart and Taylor Lautner all showing the Twilight nation a whole lot of love.

Twilight fans camped out for days prior to the Eclipse premiere in the hopes of getting a glimpse of Edward, Bella and Jacob as the stars walked the red carpet. 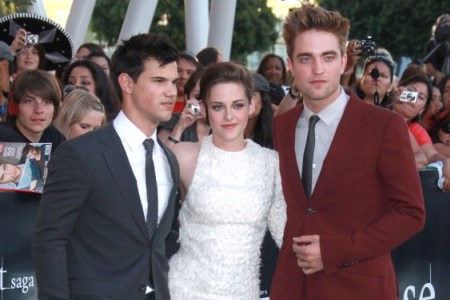 Regarding the fans, Taylor Lautner (Jacob) marveled to E!, “I’m still blown away by the fact that they’ve been here for a week. It’s unbelievable. But I’m so excited to be here and finally share Eclipse. I want everybody to see it.”

Cullen patriarch Carlisle, Peter Facinelli, who arrived with his 90210 wife Jennie Garth, came out to mingle with his fans the day before the premiere, as did Billy Burke (Charlie Swan) who also handed out burgers to the legion of devoted fans.

Nikki Reed (Rosalie), 22, showed up with much younger date Jaden Smith, 11,  from The Karate Kid. Apparently an invitation to the premiere evolved after Jaden’s father, Will Smith, introduced them on the set of Ellen.

Kellan Lutz (Emmett Cullen) brought his mom and sisters to the premiere, as well as AnnaLynne McCord from 90210. Series author, Stephenie Meyer was also on hand, as she admitted she watches the films as a fan and not as the creator of the series. She also dispelled the notion of a brooding Robert Pattinson by declaring, “He’s completely goofy.”

Proving Ms Meyers right, when asked to help explain Robert Pattinson fever, Pattinson himself quipped to the entertainment channel, “People have just got to sleep with me I guess. Then they’ll know.”

After getting accidentally Sharpied by an excited fan, Kristen Stewart, minus the blue mark on her face, explained her gradual comfort with fame, but still marveled at the fandemonium that surrounded them. “I feel like I’m one of them so it feels weird to be in this position, but at the same time, I’ll roll with it.”