Mel Gibson and Oksana Grigorieva have filed dueling restraining orders against each other — and Oksana is claiming violence! 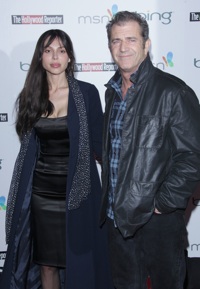 You may remember the minor scandal of Mel Gibson, a supposedly devout Catholic, divorcing his wife of a gazillion years for Oksana, his Russian mistress who he knocked up with an illegitimate baby. (Jesus does not approve.)

Oksana Grigorieva gave birth to the couple’s daughter in October 2009. The pair announced their split in April 2010, and now we might know why — Mel’s nasty temper.

According to TMZ, the pianist’s lawyers went to an LA family court for an emergency hearing to request the order of protection, telling the judge that Mel became violent with her. In fact, two different sources say he became “extremely violent.”

A separate source close to Oksana Grigorieva confirmed the report and said that while the violent incidents happened in January, “There were other acts after January that were not physical but still constituted domestic violence.”

Mel Gibson sent his lawyers to the court to request a restraining order of his own — one preventing Oksana from releasing certain information, ostensibly about this case or their personal relationship.

Sources close to Gibson wonder why, if he was as violent as Oksana claims, she traveled around the world with him afterward. The source said, “In these cases, when somebody cries wolf, the judge is mandated to assume there’s a wolf, until a full hearing can be held.”