An expensive memorial is planned to commemorate the anniversary of Michael Jackson’s death — but it is completely unauthorized and shrouded in mystery. 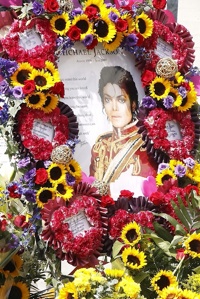 TMZ reports that the tribute, billed as Forever Michael, will be held at the Beverly Hilton Hotel. For $150 to $500 per ticket, fans will be treated to the musical stylings of various artists performing some of Michael’s greatest hits, including Chris Brown.

Problem? No one has asked the estate for permission to use any of the copyrighted material, and that step is an important legal necessity.

Howard Weitzman, lawyer for the estate, told TMZ, “No one ever contacted the Estate to see whether or not they would approve, participate in, or allow the use of Michael’s name, likeness, image or intellectual property for this event.”

Remember, no one but the executors can make business decisions like this — and no Jackson family members are executors.

So who is behind the unauthorized tribute? The Jackson Family Foundation and VoicePlate.com. While Joe Jackson’s PR person told TMZ the family wouldn’t profit from the event and that all money collected would be going to charity, a rep for VoicePlate.com says only some — not all — of the money will be donated.

Regardless of who gets the cash — the family or the charity — the unauthorized event runs afoul of the law. Only the estate of Michael Jackson, as run by the executors, has the legal right to approve use of anything MJ-related. This is yet another case of Joe Jackson exploiting his golden child for dough.