Jake Pavelka and Vienna Girardi claim their Bachelor reunion special was meant to clear the air and gain some closure. From the looks of it, we won’t be seeing fuzzy bunnies and cotton candy any time some from Vienna Girardi and Jake Pavelka. 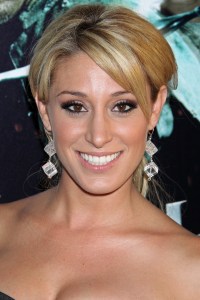 During a taping for the couple’s ABC reunion special, things got pretty nasty between Jake and Vienna.

Internet reports are making accusations that Jake Pavelka showed his fist to Vienna Girardi, but an insider says the report is absolutely false.

“It did not happen. He was calm and collected,” the insider defended to UsMagazine.com.

A rep for The Bachelor explained to UsMagazine.com, “The Bachelor participants Jake and Vienna taped an interview last night. As this was the first time the two had seen one another since their recent breakup, the atmosphere was emotionally charged,” The Bachelor rep confirmed.

“However, and contrary to reports that have surfaced about the interview, at no time was anyone ever physically in harm’s way, nor was anyone ever threatened with physical violence.”

According to the insider, Vienna Girardi kept interrupting Jake Pavelka, not letting her former fiance speak.

“He couldn’t get a word out. It was very reflective of their relationship. She was on the defense. She was playing the victim,” the source told Usmagzine.com

The night supposedly ended with a hysterical Vienna storming off the stage.

The reunion special is slated to air during a July 5 episode of The Bachelorette. And the plot thickens for Jake Pavelka and Vienna Girardi.