Courtney Love is bringing Behind the Music back to VH1 in the special way only she can — with two hours of verbal diarrhea. 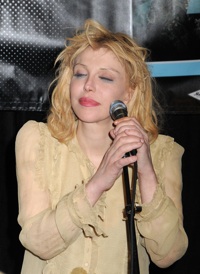 It’s no secret that Courtney is batcrap insane. If her rants on Twitter and Facebook weren’t enough to prove it, the fact that she has lost custody of her daughter with Kurt Cobain, Frances Bean, multiple times speaks volumes. Just not as many volumes as Courtney’s own mouth speaks.

And does it ever speak. Imagine her reading her wild, rambling Facebook blog entries out loud for two hours.

Here are some choice quotes:

On lying to her parents:
“I would just tell them lies… just lie. ‘I had four abortions this month,’ which is biologically impossible.”

On fame:
“I get this s**t because I’m the only (expletive) chick standing and I’m a crazy b**ch and I’m a widow and it makes me sick. It’s (expletive) pathetic! Stop it, seriously, or I’ll (expletive) kill you!”

On being a rock star:
“You’ve gotta be able to play topless and feel like a (expletive) Amazon.”

On her nose obsession:
“The men with the two best noses in Rock and Roll were Axl Rose and Kurt Cobain and I certainly wasn’t going to mate with Axl Rose.”

On breaking up with Billy Corgan for Kurt Cobain:
“At the truck stop the next day I called Corgan and said, ‘I’m so going with this guy. He’s first of all really good in bed and I like him and he’s cute.’ Billy’s nose wasn’t that bad, but I was all about mating for a nose.”

On Kurt’s drug problem and how it affected their sex life:
“I’d have to (expletive) slap him and put pins in his balls and put ice cubes everywhere and whatnot and it started to piss me off.”

On being in a mental hospital:
“I used it like a condo. I said to my gynecologist — If you don’t let me stay here I won’t go through with this.”

On her drug use:
“I dedicated my worst record to Cameron Crowe and the Scientologists. Like, that’s how much I was on drugs.”

On her Rohypnol abuse:
“I was asking someone why does Rohypnol have such a bad rap and they said, ‘Horrible memory loss.’ Well that’s what happens when I meet someone and I don’t know if I hate them or I like them or what. But I know that I did something, did I (expletive) them? I don’t know. Rohyponol.”

Did you miss the original June 21 broadcast? Never fear. I have a feeling VH1 will be replaying this episode for years to come.