The Vice President’s wife, Jill Biden, has announced that she will be appearing on an upcoming episode of Army Wives. 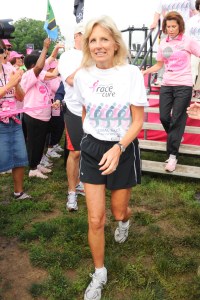 There’s nothing easy about going to war, especially not for the soldiers sent to fight or the families they’re forced to leave behind.

It’s a harrowing truth that many people might not be aware of, but which Dr Jill Biden, wife of Vice President Joe Biden, wants to raise awareness about. In an effort to illuminate the personal sacrifices that military families make, Dr Biden will appear as herself on Lifetime’s series Army Wives later this summer.

In the Army Wives episode, entitled Mud, Sweat and Tears, Biden, 59, visits fictional Fort Marshall to kick off the army base’s annual Fun Run, a charity event to raise money for kids of military families. She will spend time discussing the challenges military families face while their loved ones are deployed, with “actors” who are really the spouses of actual enrolled members of the armed forces.

In a statement Nancy Dubuc, the president of Lifetime Networks, said, “We are honored to have Dr Biden make a special appearance on Army Wives. Jill Biden’s inspiring commitment to military families should be commended, and, as longtime supporters of this cause, Lifetime Networks is proud to be her partner in relaying this message across America.”

Jill Biden has also filmed a public service announcement with First Lady Michelle Obama that speaks to the sacrifices made by military families. It will air during the episode on August 15 at 10 pm.

Read on for more Army Wives