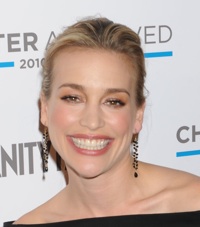 Piper Perabo looks way too young to have been around as long as she has, but there’s no other reason for you to recognize her other than her already long career. While other actresses chase tabloid fame, Perabo has chosen to develop her acting skills rather than a party habit.

Perabo quickly landed roles in multiple plays, and her first film role followed shortly thereafter:  Single Spaced in 1997. Roles in Whiteboyz (1999) and The Adventures of Rocky and Bullwinkle (2000) kept her in the public’s peripheral vision, but it was her breakout role as the lead in Coyote Ugly that put her on Hollywood’s radar.

She stayed on the map playing characters in Lost and Delirious, She Gets What She Wants, Cheaper by the Dozen, The Cave, Beverly Hills Chihuahua and The Lazarus Project, among others. Now, after trying television on for size with guest parts on House and Law and Order, Perabo is ready to reach stardom the good old-fashioned Jennifer Garner way with her new USA spy series Covert Affairs.

Why the switch from stage and movies to the small screen? “I’d been doing a play for almost a year, Neil Labute’s Reasons to be Pretty,” Perabo says. “And because of the sort of actor de facto strike and then the real writers’ strike, there had just been a real slowdown in film and scripts coming out. So when this came up, although I hadn’t really considered doing television before, because it was a feminine heroine, that really attracted me to it, you know what I mean? Not just playing like the girlfriend of the sidekick or the person who’s always being rescued. It’s just, there’s nothing to do in those roles, and they get pretty boring.”

Will Covert Affairs follow in the footsteps of USA’s other highly successful original programs like Burn Notice, White Collar, Psych and Royal Pains? Only time will tell, but with charming Perabo aboard it can’t go wrong!