With the anniversary of Michael Jackson’s death looming, we hoped it would be peaceful and drama free, but not if Joe Jackson has anything to say about it. Documents obtained by TMZ tell a different story — Michael Jackson and his death are still laden with accusations and lawsuits. 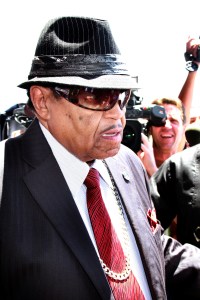 TMZ got its hands on a legal document Joe Jackson delivered to Dr Conrad Murray. According to TMZ in the official document — a provision to filing a wrongful death lawsuit — Joe Jackson challenges that Dr Murray had been consuming alcohol at a strip club just hours before he supposedly issued a deadly amount of Propofol to Michael Jackson.

TMZ reports the document states, “On June 25, 2009, prior to treating Michael Jackson, the defendant was at a strip club called Sam’s Hofbrau in Los Angeles where he had been drinking.”

Part of the document lists Michael had “neurological, pulmonary, and anemia signs over several weeks prior to his death. In May and June, 2009, Michael Jackson was confused and frightened, unable to remember, obsessive, and disorientated.” The attorney goes on to say, “He had impaired memory, loss of appetite, and absence of energy. He was cold and shivering during the summer rehearsals for his show.”

The attorney alleges the above issues were all brought on by Dr Murray’s administering a “polypharmacy” of medicine — multiple drugs.

He is also accused of lying to EMT’s and doctors about the administered drugs and essentially withholding information. “His conduct was inhuman,” Joe Jackson’s attorney said. “It was an extreme violation of the standard of care.”

Sources close to Dr Murray told TMZ, “The allegations are absolute, utter nonsense.” They also say Murray is not a drinker.

TMZ is reporting the document was served to Dr Murray on March 27, 2010 — meaning under California law, Joe Jackson has to wait 90 days from the date of delivery before filing an official wrongful death lawsuit.