Jerry Seinfeld now finds nothing funny about Lady Gaga and her antics during a visit to the Mets’ Citi Field. 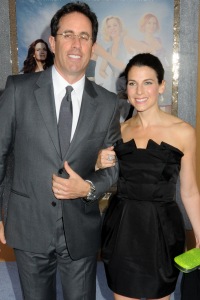 Earlier this month Lady Gaga caused quite a stir when she was caught giving the finger to photographers — and then got upgraded to Jerry Seinfeld’s private box at the famed Citi Field.

Originally, Jerry Seinfeld had no problem with the derogatory gestures caught on camera. In a statement he said his family adopted “an optimistic view of Lady Gaga’s gesture as a sign that she wants the Mets to be in first place as badly as they do.”

Turns out the funny man isn’t laughing anymore. During an interview on New York’s WFAN Sports Radio, Jerry Seinfeld ranted, “You know I changed my mind. I hate her.”

Jerry Seinfeld went on to display his change of heart. “I can’t believe they put her in my box — that I paid for,” Seinfeld said. “You give people the finger and you get upgraded? Is that the world we’re living in now?”

Seinfeld was not present for the events and he’s got quite the opinion of the Alejandro songstress.

“I wasn’t even there. I came for the night game and heard all about it. She’s a jerk,” Jerry Seinfeld fumed.

He also had some advice for Lady Gaga. “Get an act. Rhinestone bikinis and giving people the finger? But she is talented. I don’t know why she’s doing this stuff.”

What did Jerry Seinfeld think of Lady Gaga’s Yankee game media frenzy recently where she was banned and then supposedly not banned for questionable behavior including visiting the Yankees clubhouse?

“Oh please, wake me when it’s over,” Seinfeld pleaded. “I wish her the best. You now, you take one “A” off of that (name) and you’ve got Gag,” Seinfeld joked.

Well, he can try, but it’s not likely Lady Gaga will stop being Gaga! Fishnet stocking sales would seriously plummet.