“This is an adventure,” said Tom Cruise with his trademark smile. And so it is for Cameron Diaz and Tom Cruise as the pair reunites for Knight and Day, in theaters everywhere June 23.

It has been eleven years since Tom Cruise and Cameron Diaz first paired in Cameron Crowe’s mind-bending Vanilla Sky. “It’s so much fun,” Cruise said of starring with Cameron Diaz. “I wanted to work with Cameron before (Vanilla Sky) and this was the perfect character to do it in Knight and Day. It was really fun.” 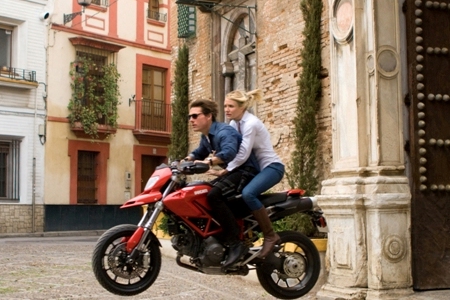 Cameron Diaz welcomed a return to the Tom Cruise movie machine. “It is such a pleasure and I feel really fortunate to have a partner that when you show up for work everyday, has got your back and is going to participate and be there and just want to make the best movie possible,” Diaz said. “And Tom is so capable. He knows everything about making movies. I learn so much from him every single day. The way his brain works around it — he’s not just an actor. He gets into the process of making movies. I’m humbled by it.”

Tom Cruise looks over at his co-star Cameron Diaz, “She is so much fun!” 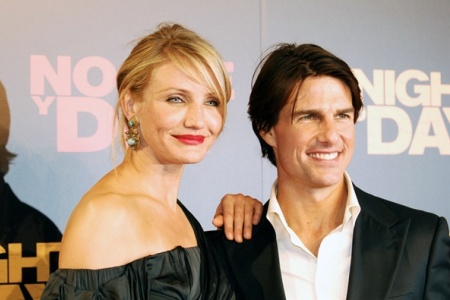 One thinks of that old adage that if the actors are having fun, so is the audience!

Did Diaz have any issues with the enormous Cruise posse? “He rolls deep with family,” she said and laughed. Diaz points around the room. “There’s a Cruise. There’s a Cruise.”

“We bring the kids, Kate and everyone, her family,” Cruise said. “Suri is great on set.”

“She’s amazing on set!” Cameron said of the youngest Cruise.

Tom Cruise welcomed the return to the cinema of Cameron. “She is always coming with ideas. She takes it to that next level you want,” Cruise said. Tom Cruise and Cameron Diaz have such control over their knowledge of film and what works for an audience. It is a surprise that neither has taken a seat in the director’s chair. “I’ve been offered, but I love acting,” Cruise said and is interrupted.

“But you can still act and direct,” Diaz said. 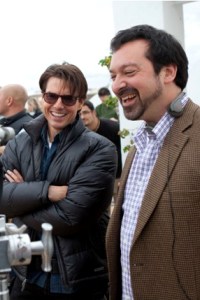 Tom is quick with his retort. “Can you imagine me…more? Cameron, Cam…seriously?”

“You need to do it,” Diaz pleaded. “You couldn’t direct yourself?”

They both laugh and launch into a language that is only known between close friends. “For reals?” Cruise asked and they continued laughing. “For rizzle?”

Both Cruise and Diaz do much of their own stunts in Knight and Day. “If you think about doing that all day long as your job, how much fun is that? How lucky are we?” Diaz said.

“How lucky are we?” Cruise agreed.

“If I could do that all day long, you don’t have to pay me for that,” Diaz said of the action sequences.

For an icon such as Tom Cruise, in the end it comes down to the story seen on screen and whether it resonates with the people buying tickets. “I’ve always just wanted to entertain the audience,” Cruise said. “That’s what it’s all about. What’s good for the movie? What’s best for the movie and what’s best for the audience. How do we do it? This movie is a two-hander. There’s great characters and it has comedy and the action and the romance, and to find that balance — and how do we put a new spin on the whole thing — it all derives from the characters.”

Read on for more Knight and Day