There’s something about the chemistry between Tom Cruise and Cameron Diaz. Whether it’s Vanilla Sky or their latest and greatest Knight and Day, Cameron Diaz and Tom Cruise are the new Spencer Tracy and Katharine Hepburn and audiences need to see more of them!

In Knight and Day, Tom Cruise portrays a spy who has been framed for wanting to sell a self-generating battery (think of the worldwide implications!) to the black market. Knowing Cruise is our hero, audiences automatically know our Tommy Boy is on the up-and-up. Enter Cameron Diaz who is on her way home to Boston for her sister’s wedding. She waltzes right onto a flight populated only with Tom Cruise’s Roy and CIA hit men out to kill him. 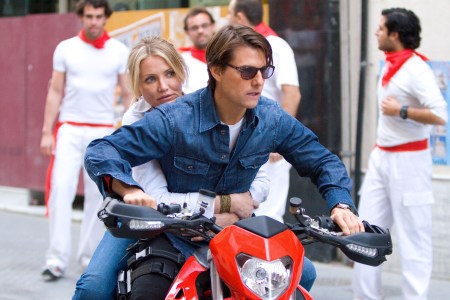 The action begins briskly while Diaz readies herself in an airplane bathroom for this attractive new man she just met with the million dollar smile. Meanwhile an onboard melee has commenced with Cruise taking out the assassins, flight crew and pilots. All were assigned to see he doesn’t make it to the arrival gate. Whether she wants it or not, Diaz is thrown into the fire of Cruise’s frame-up and must stay by his side in order to survive.

A decent premise with timely direction by James Mangold (Men in Trees, 3:10 to Yuma, Walk the Line) coupled with the sizzling chemistry of its two stars, Knight and Day is the summer movie to see for a roller coaster ride that is every bit as fun as it was advertised in a two-minute trailer.

Tom Cruise was born to play many roles, but his turn as Roy in Knight and Day is further proof that he is a natural movie star like Hollywood has rarely ever seen. I have not always been the biggest Tom Cruise fan, but of late, he has managed to do no wrong. Whether in his scene-stealing turn at the MTV Movie Awards or his deadly perfect spy in Knight and Day, Cruise is cruising and there is no better proof than in his latest film with Cameron Diaz.

Diaz could have played her June character as the typical Hollywood damsel in distress who has a mind of her own and gotten away with it. What Cameron Diaz does with her time opposite Tom Cruise is go scene-for-scene with the biggest movie star in the world, which earns her a second kudos of the summer after her terrific warrior-inspired performance in Shrek Forever After.

Cameron Diaz plays June with perfect panache and pulls it off with unmatched charm in her career. 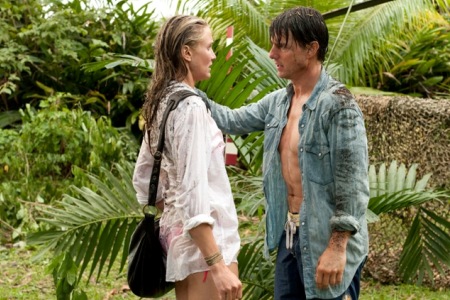 Knight and Day differs from other films of the action-comedy-romance genre in that it truly delivers. It is not an easy task to combine a compelling story with actors that are game for bringing an action movie to life, and to also display sizzling onscreen chemistry between two leads. Knight and Day is as much fun as you will have all summer at the movies.

Read on for more Knight and Day