SheKnows: What was it like working with all the guys in this comedy, Salma, and what was your experience guesting on 30 Rock like? 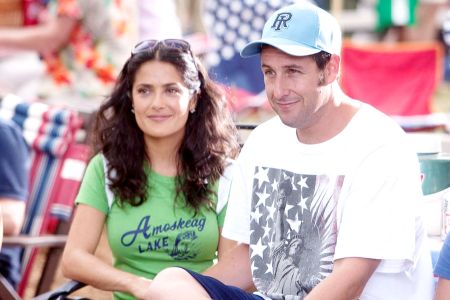 Salma Hayek: I loved it. I really loved it. I’m very grateful I did that because it was wonderful training for this. Alec (Baldwin) also likes to improvise a lot and it’s really exciting when you have good chemistry with an actor and good communication. You sort of build things as they go along and it’s magical. It was like Nirvana, that experience. It was gonna be one episode then two episodes, then three and then, after six, I was tempted to go back but I said, “I have to stop. I have to go on.” But it was great that I got this movie because I love comedy and I loved working with everyone in the film and it doesn’t get better than this. I’ve always wanted to do comedy and I’m glad it was my first big comedy.

SheKnows: And Maya, working with the guys?

Maya Rudolph: I come from the same family as these guys and even though I wasn’t at SNL at the same time, we have the same training and we literally speak the same language. It’s one of those really nice relationships where, even if you haven’t worked together, because you’ve done that show and you’ve been down in the dirt with them, you can all relate to each other. Also, sketch comedy is a very collaborative form and you can see it in all of Adam’s movies. It’s not just about you scoring in the movie but everybody is funny in it. So that’s why, for me, it was such a joy. I come from an improv background and I love to work that way. You shoot the script and then you get to have fun with all these people on the side saying, “Try this, say that,” and Adam going , “Say this” and you become a puppet sometimes or you have ideas. Maria came up with one of the funniest bits involving the milk and that, to me, is what sketch comedy is about, making the scene great, making the movie great, as opposed to making yourself great and I really love working that way. So this was like that world Adam always creates but really amplified. There were so many of us. I thought it worked really well. 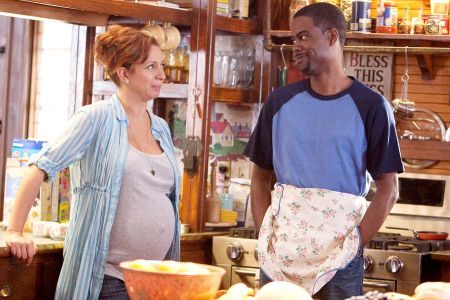 SheKnows: Okay, tell the truth. Which guy in the movie is the best basketball player?

Maria Bello: Adam could be a professional basketball player, I think.

Salma Hayek: He was really good.

Maria Bello: And he almost beat my nine-year-old [laughter].

Salma Hayek: Don’t laugh. Her nine-year-old was feared by all of the grips and everybody because he was so good.

SheKnows: In the film, someone almost tips that the tooth fairy isn’t real. What story or myth do you hope your kids hang on to for a while before they outgrow it?

Maria Bello: My boy’s been watching movies since he was a baby so he thinks everything is make believe. 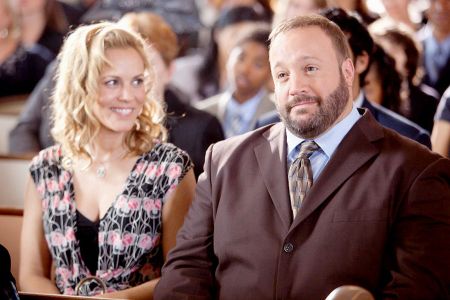 Maya Rudolph: We started this thing in my house called the Switch Witch around Halloween which is a really great way to make your kid give up their candy. I don’t mean all their candy but not to eat every piece. Think of all the bags of candy where you think, “Holy Christ, if my child eats this much candy, they’re going to shoot up to the moon.” So my friend said, “Oh tell them about the Switch Witch. It’s like the tooth fairy.” You say, “Why don’t you make a bag for the Switch Witch and then you leave it on the stoop because in the morning, there might be a present because the Switch Witch loves candy.”

Salma Hayek: I’m concerned about my daughter because she will not believe in Santa Claus. No matter what you say to her, she just doesn’t buy it. She’s two and a half! I refuse to give it up. I said, “No. There is a Santa Claus.” She said, “Okay, mommy, in pretend world, right?” I go, “No! No, for real.” She in turn said, “Yeah, for real.” There is nothing I can say that makes her believe in Santa Claus. But, I think she’s doubtful at least about fairies, so I’m shoving the fairies because it’s my hope that she’ll have some kind of make-believe characters in her life. I don’t know why that child is like that. I believed in Santa Claus and I was really upset when somebody told me the truth. I’m hopeful that she’s too young to believe in Santa Claus and, in a year or so, she’ll really believe because it’s always a great tool for blackmail when you say, “If you don’t do this, Santa Claus is not gonna bring you anything.”

The state of women in comedy

SheKnows: Maya, you were on Saturday Night Live when there were some really great women, you, Tina Fey and Amy Poehler. How was it working on this film with so much “boy” humor?
Maya Rudolph: Everybody says it’s boy humor and maybe that’s more specific to their personal voices but I relate to it so much. I just feel very at home with them. Maybe it’s growing up with an older brother but I like when the boys are together because I like to get in there and be like, “Hey, guys, what about this?” That’s sort of how I figured out how to be a comedian, trying to be as cool as my older brother and all of his friends from his basketball team who would come over and I was the wacky little kid doin’ stuff. But it feels great, obviously, to get in there with them and make them laugh, too. I think there’s such a mutual respect that already establishes the relationship because of having that bond. I don’t think the flavor of your comedy really matters and I don’t think anybody really gets into it saying, “All right, this is a good year for the ladies.” It just turned out that we were badass and we were all there at the same time [laughter]. It wasn’t planned but it worked.